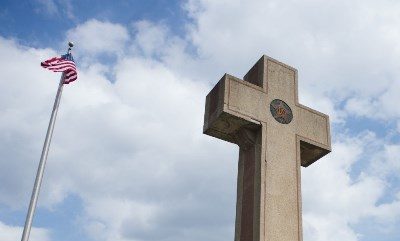 This Sunday, the world will commemorate the 100th anniversary of the armistice that ended World War I. Sadly, a 40-foot-tall concrete cross in Bladensburg, Maryland, honoring soldiers who died fighting for their country in that war is now in the cross-hairs of the American Humanist Association. The U.S. Supreme Court announced last week that it would review the challenge to the memorial’s constitutionality.

In its quest to protect the memorial, the American Legion is being represented by First Liberty Institute. Responding to the news from the Supreme Court, Kelly Shackelford, president and CEO of First Liberty, warned, “If this monument is bulldozed to the ground, it’s only a matter of time before the wrecking ball turns on Arlington National Cemetery and the thousands of memorials like this one across the country.”

The Bladensburg World War I Veterans Memorial was erected in 1925. While a federal district court ruled in 2015 that it was constitutional, the U.S. Court of Appeals for the Fourth Circuit reversed that judgement on Establishment Clause grounds.

American Legion National Commander Brett Reistad said, “For nearly a century, The American Legion has focused on preserving the memories of our fallen brothers and sisters. And that’s why it is so critical that we – veterans and civilians alike – never forget those honored on the Bladensburg Veterans Memorial.”