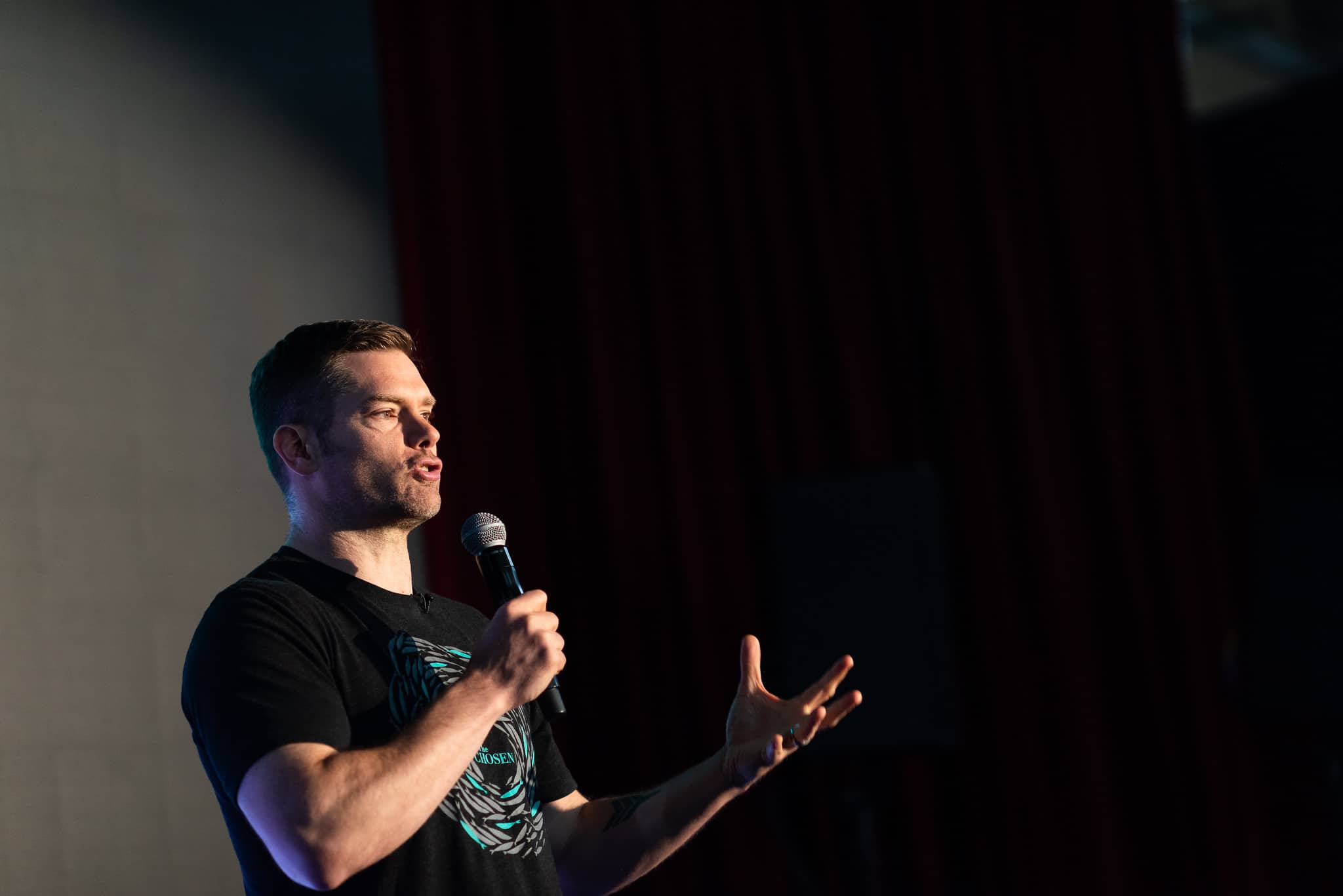 9 Things You Didn’t Know About The Chosen: An NRB 2021 Case Study

GRAPEVINE, Texas (NRB) – On Tuesday afternoon, NRB hosted a special session highlighting the story and formula of “The Chosen” series, the largest crowd-funded media project of all time.

“The Chosen,” currently in its second of seven seasons, is the first multi-season show based on the life of Jesus Christ. With the goal of reaching one billion people without receiving any funding from a Hollywood studio or network, the series is completely free to watch. By “paying it forward” viewers can help finance the rest of the seasons and keep the show free.

Creator and Director, Dallas Jenkins, and Executive Producer, Derral Eves, walked NRB attendees through their journey with “The Chosen,” offering practical advice for other ministries. In sharing their story, attendees were given the “Code for Building Seriously Authentic Brands.”

This code is outlined with nine things you didn’t know about “The Chosen.”

Fans of “The Chosen” know the creation story of the series. They have heard Dallas say that the show was birthed out of a failure and a short film. What fans may not know is the intentional use of that creation story. Jenkins and Eves explained that emphasizing the story behind a brand establishes a welcoming connection with fans.

“We didn’t make it glamorous. We just told our story. That became our operating principle from the beginning,” Jenkins said.

“That is the key for any brand: ‘what is truth?’ because truth connects. It’s really important to keep that story and share the story often,” Eves said.

A creed is the intended message of a brand. The creed for “The Chosen” is rooted in “holding the gold.” Rather than a Hollywood studio controlling the creative process, Jenkins and Eves knew that with a project like “The Chosen,” they’d have to operate within their own rules.

“We wanted to let people know that this was not what they’re used to when it comes to Jesus projects,” Jenkins said. “Hollywood’s golden rule is ‘he who holds the gold makes the rules.’ But we’re going to make our own rules.”

But without a purpose, a creed is hollow. The purpose of “The Chosen” is to bring people to authentic Jesus. For brands to maintain their voice and control they must remember their operating principles.

A t-shirt with gray and teal fish forming a circle. A bold black and white poster. The music of the opening credits. The font face of “The Chosen” logo. All of these things serve as representations of “The Chosen” brand. Icons define a brand, which Eves explained is essential because “icons need to amplify your creed.” Each icon should be intentional, not simply popular.

“We love our logo, but it means nothing if it’s not connected to the show,” Jenkins said. “Icons have to be authentic.”

Icons should be a natural overflow of the project, stemming from the story your brand wants to tell.

A brand’s rituals should happen organically and become part of the brand. The interactions “The Chosen” has with their viewers are intentional and authentic, resulting in rituals based on what resonates with the audience, not simply what “The Chosen” staff choose. For example, each live stream for “The Chosen” follows patterns based on comments from viewers. From Dallas Jenkins’s “The Chosen Gifts.com”  jingle, to his signature sign off—“Remember it’s not your job to feed the 5,000”—there is a pattern that formed based on feedback from viewers. Rituals become part of the experience for your audience, but you must first listen for them.

Super fans of projects like “The Chosen” offer loyal support and encouragement. Haters of the series serve a different but still beneficial role.

“We started learning early on that the people who were complaining the most about the show created opportunities to dialogue and generate more conversation with our posts,” Jenkins said.

By leaning into criticism, the authenticity of a brand shines amidst negativity. Not only can haters ignite passion into fans, but they should also be viewed as an opportunity.

“I get called a heretic, blasphemer, false prophet every single day publicly,” Jenkins said. “That’s an opportunity for us to disciple. People are watching how we respond with the truth of our show.”

Rather than backing down from haters, engage them as an opportunity.

The sacred words of a brand grow personal connections with viewers. When you know the words used inside the “inner circle” you naturally feel as though you belong. Eves explained how sacred words for “The Chosen” are all dictated by the audience.

“Pay attention to the comment section to see what phrases people cling to,” Eves said. “Let the audience dictate what our sacred words are going to be.”

Phrases like “get used to different,” “binge Jesus,” “come and see,” and “pay it forward” have become sacred words for fans of “The Chosen”. These phrases wrap the audience in the language of the project and are consistent with the message.

“Every brand needs one. Someone has to fulfill that role because leadership is much more than being a spokesperson,” Eves said.

Fans see a lot of Dallas Jenkins. As the creator and director of “The Chosen,” Jenkins was the authentic choice as the spokesperson for the brand. However, Jenkins doesn’t consider his work in front of the camera to be his ultimate title.

“The leader might also happen to be the spokesperson, but I don’t ever wear that title because it implies that I’ve got something practiced,” Jenkins said. “I don’t ever have a script for our live streams. I’m not sitting on some throne, I’m sitting on my exercise ball in my home office. I burped a couple times on live streams—that’s authentic!”

A leader may be the face of the brand, but their leadership responsibilities are not found solely in their position as spokesperson.

In a world of disruption, how does a brand stand out among the noise? “The Chosen” fashioned their distribution model with their message at the core.

“Our distribution model is very particular in where our audience is at. One thing that Jesus did is he went to where we are. He meets us there, and your brand needs to meet your audience where they’re at,” Eves said. “You can’t expect an ad to do it.”

Jenkins and Eves emphasized that a brand must know where each message is going, while maintaining a personal, intimate method.

“Wherever you decide to go, the method may change but the message doesn’t,” Jenkins said.

The NRB Convention undoubtedly welcomed some super fans of “The Chosen.” For Jenkins and Eves, that fan base is worth celebrating.

“We embrace what our fans are doing and spotlight it to make it a part of what we’re doing,” Jenkins said.

With user-generated content, and super fan communities and outreach, “The Chosen” emphasizes the importance of cultivating your fan base. There’s a reason why the series’ website doesn’t have pictures of models, but pictures of fans wearing merchandise. In doing so, the fans become one of the most powerful advertising and marketing assets as they share what they love about the brand.

Dallas Jenkins and Derral Eves preach authenticity because it defines their brand. These nine keys they offered to NRB attendees are reflected in the work of “The Chosen.”

Season three is currently 38% funded while seasons one and two have been viewed over 160 million times.

“We had to create a movement,” said Eves. “The best way you can help us is to invite people to come and see.”

For more information about “The Chosen” visit watch.angelstudios.com.