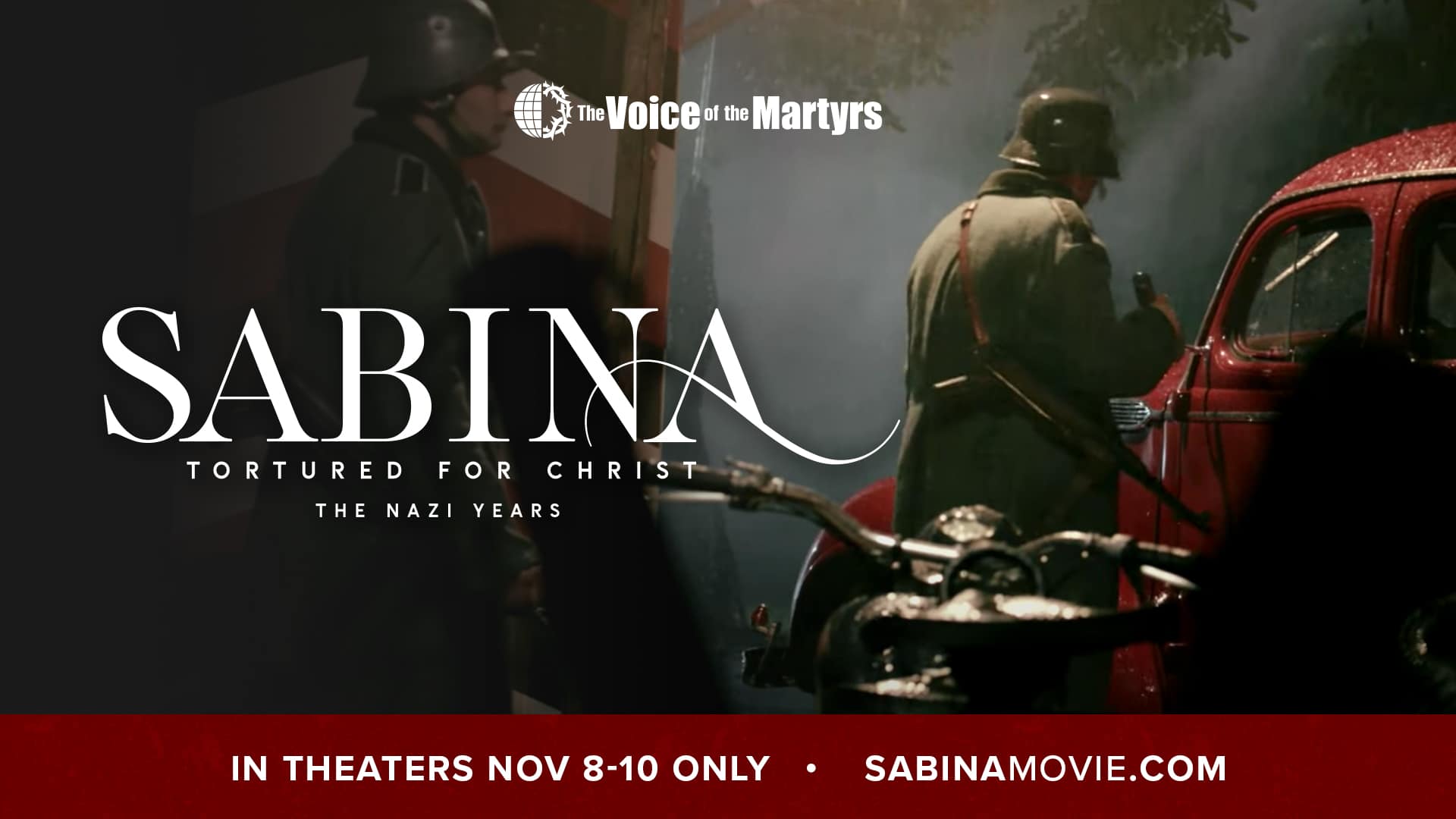 The Power of Storytelling: Sabina the Movie

Stories of faith inspire, encourage, and teach Christians of every generation. Creative mediums give Christian communicators the opportunity to give language and form to the message of the gospel in a manner that is compelling to their audiences.

This week, NRB member Voice of the Martyrs uses film to bring life to the message of forgiveness that is inherent to the gospel. In theaters November 8-10, Fathom Events’ latest special, “Sabina: Tortured for Christ, the Nazi Years,” tells the powerful, true story of Sabina (Oster) Wurmbrand and her husband, Richard, co-founders of the nonprofit The Voice of the Martyrs—an interdenominational missions organization that serves persecuted Christians around the world.

“Richard and Sabina were exemplary Biblical disciples. Their story pushes each of us to rethink our concept of forgiveness and what it looks like to love our enemies as Jesus instructed,” said Todd Nettleton, Chief of Media Relations and Message Integration for The Voice of the Martyrs—USA and host of VOM Radio. “Sabina’s life is ultimately a testament of how God’s love can transcend pain and struggle—and even transform the lives of those around us. This story is truly inspiring. It will encourage every viewer to be transformed from the inside out by the power of God.”

The film is set in Romania during World War II and spans the years from 1938 to 1944, taking viewers on a journey to discover why Sabina, a Jewish Christian, would risk her life to offer help to German soldiers—enemies who had killed her family.

“Making a period piece like ‘Sabina’ was a delightful artistic challenge—recreating what Romania looked like in the 1930’s and 40’s down to every fine detail like fashion, automobiles, and storefronts,” said director, John Grooters. “But even more substantially, I find Sabina Wurmbrand to be one of the greatest women of the 20th century, and it’s a joy getting to introduce her to modern audiences.”

In introducing Sabina to the audience, this film paints a vivid and beautiful picture of the transforming work of the gospel by showing viewers the tangible impact of forgiveness in Sabina’s life. Sabina’s story puts feet to forgiveness—demonstrating what it looks like to act out of forgiveness and to love our enemies as Christ has called us to.

“If Christ could empower Sabina to forgive the Nazi soldiers who killed her family, he can probably empower me to forgive,” Nettleton said. “If she can forgive in that situation, I think it gives us all hope that God can empower us to forgive as well.”

“Sabina” was filmed on-site in Romania and produced by a Romanian crew and is receiving high praise and recognition including being named “Best Feature” by Audience Choice and receiving the “Best Original Film Score” award at the recent Christian Worldview Filmmakers Guild and Festival. Some of the scenes were even shot in the place where they originally happened. For example, Richard’s baptism is shot in the room where he was baptized with the baptismal that he was baptized in. This film brings the Wurmbrands’ story to life for modern audiences using video—the language of our culture today.

In this film, the audience doesn’t meet the Wurmbrands as superhero Christians. Instead, they meet them as a young couple that was not interested in the things of God at all and watch their story unfold as they become Christians who live out the gospel of Christ despite difficult circumstances.

“Everyone who watches the film can find themselves somewhere along the path that Richard and Sabina take,” Nettleton said.

And “Sabina” is one film that does just that. Artistically, it is a film that stands on its own merits, reaching both believers and nonbelievers with a compelling message.

“I believe and am praying that God will use this film to mend relationships, mend brokenness, and bring about a lot of forgiveness in the people who watch it,” Nettleton said.

“Sabina: Tortured for Christ, the Nazi Years” is showing in theaters nationwide Nov. 8, 9, and 10. To learn more and to purchase tickets, visit https://www.sabinamovie.com/. Individual ticket purchasers may also claim a free copy of “Wurmbrand: Tortured for Christ, The Complete Story,” which provides a more in-depth look into the Wurmbrands’ story, via the film’s website at SabinaMovie.com. Group study kits focused on the life of the Wurmbrands are offered free with group ticket sales.

“Because of its artistic quality, it’s worthwhile to see it in a theater,” Nettleton said. “This is going to be an experience that you want to have in a theater.”