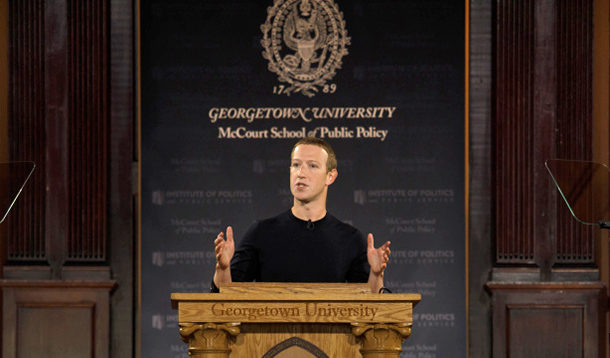 I have been following Facebook founder and chief Mark Zuckerberg’s recent statements about free speech, both in his recent testimony before the House Financial Services Committee and at Georgetown University. On both occasions he has ardently defended his plan during this election cycle to give broad leeway to “political” expression in Facebook ads – a stark contrast from Facebook’s notorious examples of viewpoint censorship in other categories, such as religious expression (more on that later). Reactions to Mr. Zuckerberg’s plan have broken down along two major lines.

One of the more thoughtful though misguided criticisms of Zuckerberg’s approach appears in a piece by Raina Kumra and Jeff Berman in the online tech and business report Quartz, a journal that has been rated as a “Left-Center Biased” by MediaBiasFactCheck. In the Quartz op-ed, the authors lambasted Facebook’s policy for being too tolerant of potentially misleading political ads.

The two raise special fears of damage to our democracy if false information is given full cyber-reign during this election campaign, writing, “the proliferation of disinformation online is starting to look like digital Ebola for democracy,” and reminding us that there are only “374 days until the 2020 presidential election.”

Still, is this a cry for political speech control in order to save democracy, or a politically driven ploy? After first warning us of Russia and Iran meddling in this upcoming election, the authors note in the very next sentence how the “Trump campaign” will be spending millions on social media ads. That not-to-subtle attempt at equivalence is not to be missed.

By contrast, in support of Zuckerberg’s plan to take a mostly hands-off approach to political ads on Facebook’s platform, law professor and pundit Jonathan Turley writes: “The truly insidious aspect of this effort by those on the left is that they are dressing up censorship as the protection of democracy to try to convince citizens to give up core free speech protections. In the silence that would follow, few would be able to object. After all, the censors could merely treat censorship objections as simply more ‘lies’ to take down.”

I agree. Yet, I would urge – and for years have urged – Mr. Zuckerberg and other Big Tech owners to do more than just protect political speech in an election cycle. That is slicing free speech far too thin. In our 30-page white paper report CHOKEPOINT: Solving Big Tech’s Grip over Free Speech, current examples are cited of blatant anti-Christian viewpoint suppression. After all, religious free speech needs protection, too. In the report I have also laid out a potential method to constitutionally instill free speech values across Big Tech’s monopolistic platforms. We are distributing that report among Capitol Hill leaders and influencers.

Our Founders knew that a free Republic requires an informed electorate. While the risk of election disinformation is always present, a greater risk is the idea of a private Silicon Valley “truth police.” Beyond that, there is also a need for a full and unfettered marketplace of opinion on big digital spaces regarding spiritual values and eternal truth. A censored election can ruin a nation. A censored Gospel will ruin the world.