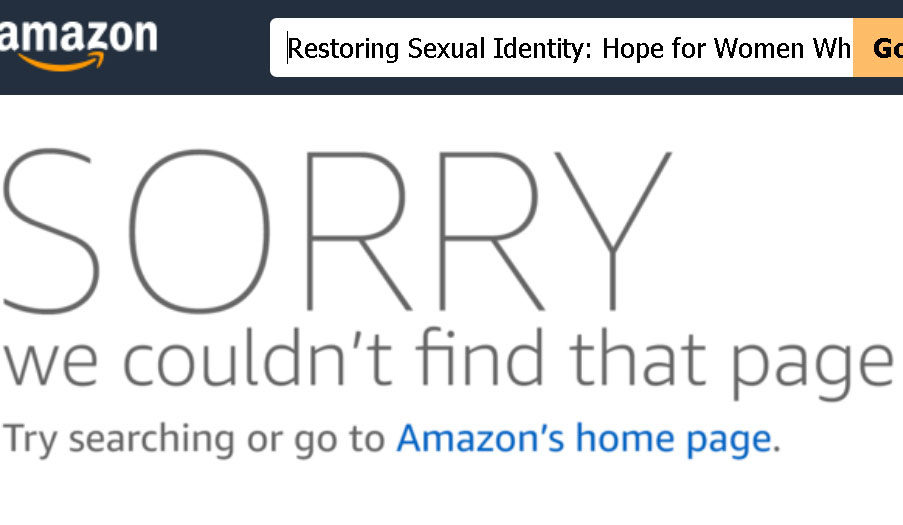 A book written by NRB member Anne Paulk, who heads the Christian ministry Restored Hope Network, has been stripped off of Amazon’s popular book site. When questioned about the banning of Paulk’s book, Restoring Sexual Identity: Hope for Women Who Struggle with Same Sex Attraction, Amazon replied that the book violated its “content guidelines,” according to CBN. The tech giant’s rules openly state that even though books containing “objectionable” viewpoints will be permitted on its site, nevertheless works exhibiting “intolerance” toward “sexual orientation” issues will be stricken.

While the intolerance by Silicon Valley Big Tech companies toward Christian orthodoxy, along with their pattern of viewpoint suppression, has been established beyond dispute, questions regarding a solution still remain. Congress has held hearings on the problem of viewpoint discrimination by these large internet platforms, and another is slated for later this month in the Senate Judiciary Committee, where the focus will be on antitrust issues.

It seems obvious that enterprises like Amazon and Facebook wield market dominance of monopolistic proportions. For instance, the number of monthly users on Facebook’s many platforms exceeds all the users of its seven web rivals combined, according to Facebook co-founder Chris Hughes’ recent op-ed in The New York Times. As for Amazon, Jun-Sheng Li wrote in Tech Crunch last March that “Amazon has nearly 50 percent of all e-commerce trade.” While I am a great believer in free enterprise, antitrust laws were designed to set guardrails around monopolies in order to squelch unfair, anti-competitive conduct that harms consumers. The problem with applying antitrust laws to stop viewpoint suppression by Big Tech companies is that it may be a clumsy fit, as antitrust rules are designed to benefit consumer choice and pricing, not to vindicate freedom of speech. And even if these companies were broken up, it would do little to change the worldview of Silicon Valley that has a record of intolerance toward conservative political opinions and traditional Christian views.

But aren’t these private companies? Absolutely. And aren’t they entitled to decide their own rules and censor anyone they wish? Not necessarily, for two reasons. First, they are unlike traditional businesses that sell their privately owned services and products through their privately operated avenues of distribution. Rather, they are online platforms that have both aggregated control over, and have trafficked in, a quasi-public cyber resource: the internet, which – like our interstate highway systems, navigable rivers, electric power, and radio and television spectrum – is an essential public resource that, by its nature, requires some level of government management and regulation. The internet was first called ARPANET, named after the research unit within the U.S. Department of Defense that originally developed it, aided by the National Science Foundation and a small army of computer engineers and academic institutions acting as defense contractors. It slowly opened to public use – most dramatically in 1983, when a universal Internet Protocol (IP) was established and ARPANET became the internet. While this communications phenomenon has never been clearly defined in terms of legal status, one thing is clear: Neither Amazon, nor Facebook, nor any other tech company may lay claim to ownership or dominion over cyberspace.

Secondly, unlike newspapers, magazines, or radio and television stations, these tech giants are not primarily engaged in development, or creation of expressive content of their own that is of the kind generally protected under the First Amendment. Rather, they serve as conduits or platforms for the distribution of user-generated expressive content – our posts, messages, images, and products (including books like Anne Paulk’s) together with our opinions and viewpoints. In short, they have made their money as a distribution and networking system for the ideas and expressions of the public.

How free speech and free enterprise can both be reconciled in this complex scenario remains to be seen. U.S. Senator Josh Hawley (R-Mo.) has authored a bill that would strip the biggest tech companies of their current legal immunity from lawsuits if they continue their political viewpoint discrimination. It is apparent that these monolithic companies will not honor free speech values voluntarily. Here at NRB, through the John Milton Project for Free Speech, we issued our initial report in 2011 warning of a likely viewpoint suppression campaign by large tech platforms. I had the honor of moderating in Washington several panel discussions of experts in technology, government, media, and law on this problem. In 2013, we issued a Free Speech Charter for the Internet that showed how Supreme Court free speech rules could be adopted voluntarily by these companies. Even with the pressure of congressional hearings and public attention, Silicon Valley has resisted.

Considering the fact that a few technology monopolies hold in their grasp the most potent communications systems in the world, it is time to decide exactly how important, or how diminished, the values of free expression will become in our constitutional Republic. Given the rapid growth of technology and the companies that dominate it, the time has come to forge a wise and workable solution. We cannot afford to wait.