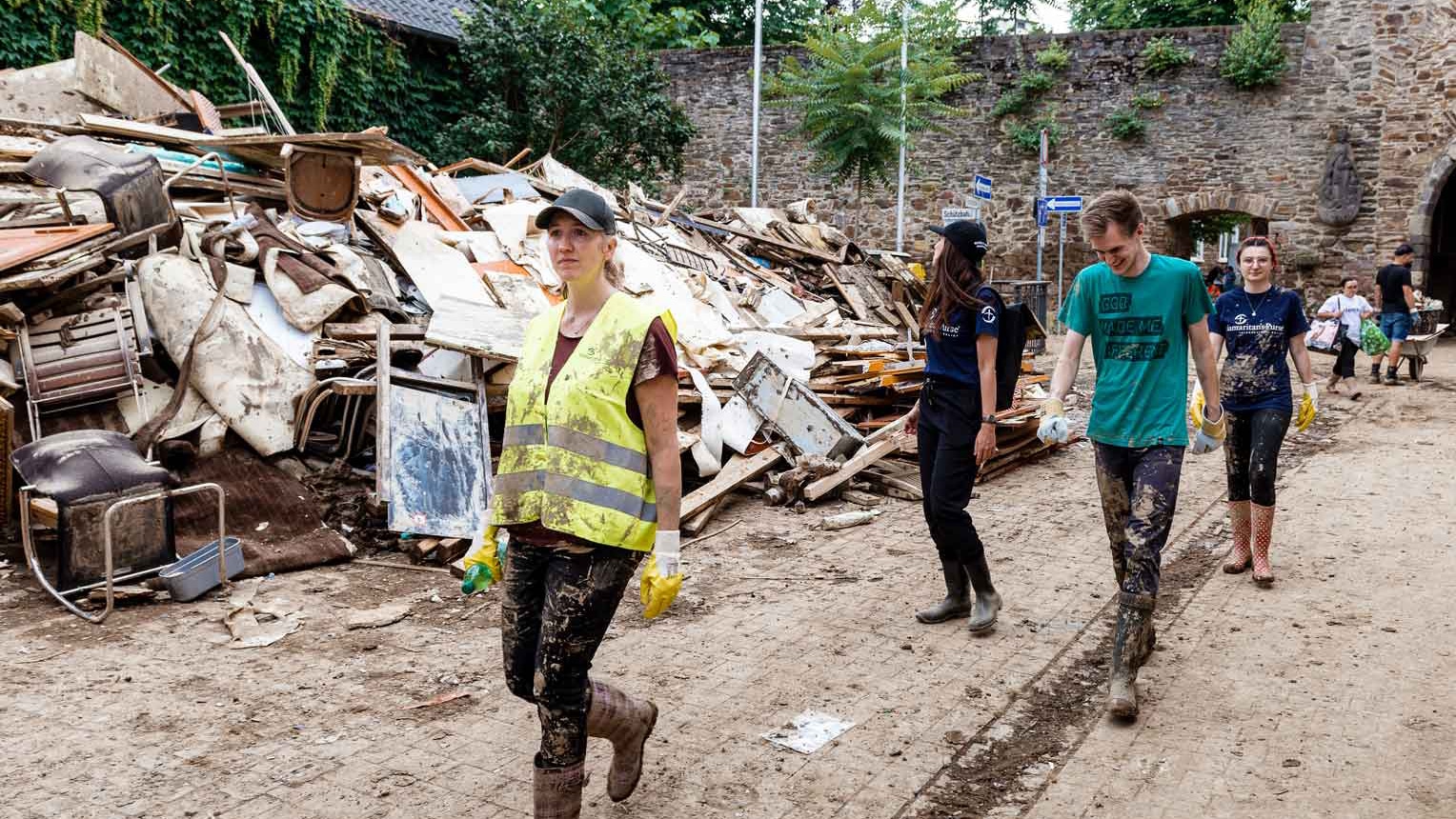 “I saw employees from Samaritan’s Purse; I just spoke to them,” German homeowner Michael Münn-Buschow said. “They came and helped us.”

On July 14, record amounts of rainfall caused the Ahr River to flood Ahrweiler, a rural district in Western Germany. As the river overflowed and water and mud rushed into villages, the district experienced damage that hasn’t been seen in generations. Thousands of centuries-old homes and family businesses were destroyed, and nearly 200 people died. With the massive amount of rainfall, the rapidly rising muddy water had nowhere to go in the community’s valley sandwiched with steep hills on both sides.

Within 24 hours of the floodwaters receding, NRB member Samaritan’s Purse, in partnership with Evangelische Freikirche Koeln Ostheim church in Cologne, Germany, began mobilizing volunteers to the area. Since then, over 350 volunteers have gone into German communities to serve families, salvaging personal belongings where possible and removing thick layers of mud from their homes. Samaritan’s Purse has deployed 14 international disaster response specialists to work alongside its German affiliate office.

“Jesus came for the people. He served people, and he told us to wash the feet of others,” Samaritan’s Purse team lead Eduard Martens said. “And this is what’s on my heart—serving others without looking to myself. These people are selfless. They were planning on vacations, but they didn’t go. They’re helping because their heart is for Jesus.”

Over the past couple of weeks, Samaritan’s Purse volunteers have removed mud bucket by bucket from homes and businesses that were centuries old.

“There were untouched piles of debris all over entire streets,” Nick Bechert, one of Samaritan’s Purse’s international disaster response specialists said. “And much of the towns were filled with a thick, slippery mud…. It was hard to hear stories of how fast the water came through, how there was no time to prepare for it, leading to the loss of life and increased property damage.”

As part of their response, Samaritan’s Purse mobilized site leaders who are trained in spiritual and psychosocial first aid. These leaders know how to look for the common signs of trauma, listen and be present with hurting people, and connect these people to the resources they need.

“I believe that God calls us to help our neighbor — no matter where in the world that neighbor may be. Right now, they happen to be in Germany after a flood,” Bechert said. “A major component of this response [effort in Germany] has been facilitating hundreds of Christians from all over Germany to be present and supportive, working in homes along with families and individuals working to rebuild their lives.”

Münn-Buschow and his wife Iris live in a home that has been in Iris’s family for hundreds of years, and in only a short time, floodwaters filled his basement and the first floor of their home.

“I looked out the roof window and suddenly the Ahr came closer and closer to us,” Münn-Buschow said.

Please join us in continuing to pray for the families in Germany and teams that are providing aid. Pray that God will use these teams to minister to families in the weeks and months ahead.