As the new year—and a new Congress—unfolds, the public policy division at NRB anticipates an exciting new chapter of advancing NRB’s strategic priorities in the Nation’s capital as we protect the rights and interests of Christian broadcasters in the legislative and regulatory arenas.

“The effectiveness of NRB government relations rests on the strength of our relationships with lawmakers, policymakers, and their staff,” says Noelle Garnier, NRB’s Washington, D.C.-based director of public policy and communications. “It’s a great privilege to champion the NRB brand on Capitol Hill and represent the interests of small, local, and independent broadcasters to the nation’s leaders.”

2022 was a fruitful and rewarding year for NRB government relations, with strategic wins in a variety of public policy verticals springing from NRB’s unique profile as the premiere association of Christian broadcasters.

Throughout the 117th Congress, NRB advocated for H.Con.Res.33, the Local Radio Freedom Act (LRFA), a nonbinding resolution that expresses a commitment from Congress not to levy a new performance tax on broadcasters. NRB met with lawmakers, mobilized member stations to air spots supporting the LRFA, and urged NRB radio members to engage their representatives using advocacy materials provided by NRB. In September, the LRFA crossed a key threshold: an absolute majority in the House of Representatives, sending a clear signal that any performance tax legislation would be dead on arrival. NRB joined industry colleagues in successfully ensuring that the opposing bill, the American Music Fairness Act, did not circumvent the legislative process and was not included in the year-end omnibus bill. The Local Radio Freedom Act remains a key area of collaboration between NRB and industry colleagues and will likely be reintroduced in the 118thCongress in early 2023.

Representing Christian Broadcasters at the FCC

In July, NRB filed comment on a proposed FCC regulatory rate increase and urged the Commission to reexamine its fee rationale, unburden broadcasters from the costs of broadband-related Commission activities, and exercise its discretion to mitigate the adverse effects of a substantial fee increase. In August, NRB President & CEO Troy A. Miller and Noelle Garnier met with senior FCC Media Bureau staff to discuss issues of longstanding importance to NRB members, as well as up-and-coming proposals with significant impacts, including regulatory fee methodology, the creation of new compliance burdens, and the significance of must-carry rules to Christian broadcasters. At the 2022 NRB Convention, FCC Commissioner Nathan Simington participated virtually in a fireside chat on issues including Section 230 and its role in tech censorship, net neutrality, and equal employment opportunity (EEO) rulemaking. 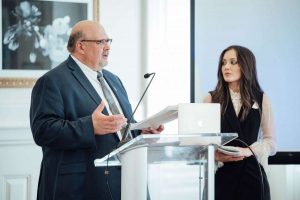 NRB celebrated a landmark year for the pro-life movement, hosting an expert panel on the pro-life, post-Roe landscape in the days following the Dobbs decision. The Supreme Court’s decision gave rise to rampant hostility against pro-life groups, and in July, NRB sent letters of appreciation to seventeen state attorneys general who wrote to Google chief executive Sundar Pichai to warn the tech giant not to discriminate against crisis pregnancy centers in Google search results.

In October, NRB filed a comment on a proposed rule by the Department of Health and Human Services (HHS) interpreting Section 1557 of the Affordable Care Act (ACA), which concerns “nondiscrimination in health programs and activities.” NRB’s comment objected to any language in the proposed regulations that could be read to violate, supersede, or preempt professional and evidence-based clinical judgments by requiring the provision and coverage of medically ineffective or harmful procedures. In November, NRB co-hosted an exclusive call with former Speaker of the House Newt Gingrich, revealing new data on Americans’ views toward the transgender agenda and encouraging listeners to boldly speak up on this issue as Christian leaders, broadcasters, podcasters, and communicators.

In December, through Member Alert communications and phone scripts, NRB equipped members to engage their representatives on the so-called Respect for Marriage Act. NRB spoke out against the betrayal of faith-driven Americans by twelve Senate Republicans, and NRB President & CEO Troy A. Miller gave more than a dozen interviews expressing NRB’s opposition to the legislation and its inherent religious liberty risks.

In 2022, NRB communications and public policy worked hand-in-glove to message our strategic priorities, bring NRB members up to date on impactful policy matters, mobilize citizens to engage with lawmakers directly, and amplify the successes of our association members in the advocacy space. Behind the scenes, we developed NRB’s relationships with lawmakers, Congressional staff, public policy experts, and industry colleagues. On air, NRB seized every opportunity to communicate consistent messages on challenging issues of the day. We will build on these successes exponentially as we refine and expand NRB policy operations and deepen our relationships with elected officials, agency leadership, likeminded coalitions, and corporate entities in an action-oriented 2023.

As anti-Christian hostility increasingly finds expression in powerful corporations and even institutions of government, NRB seeks to skillfully leverage public policy engagement to hold the door open for Christian broadcasting, defend First Amendment freedoms, and advance excellence in Christian media. We welcome communication from members about your legislative interests, policy issues that impact you, and the advocacy work that your organizations are doing. For all inquiries related to NRB advocacy, please contact policy@nrb.org.