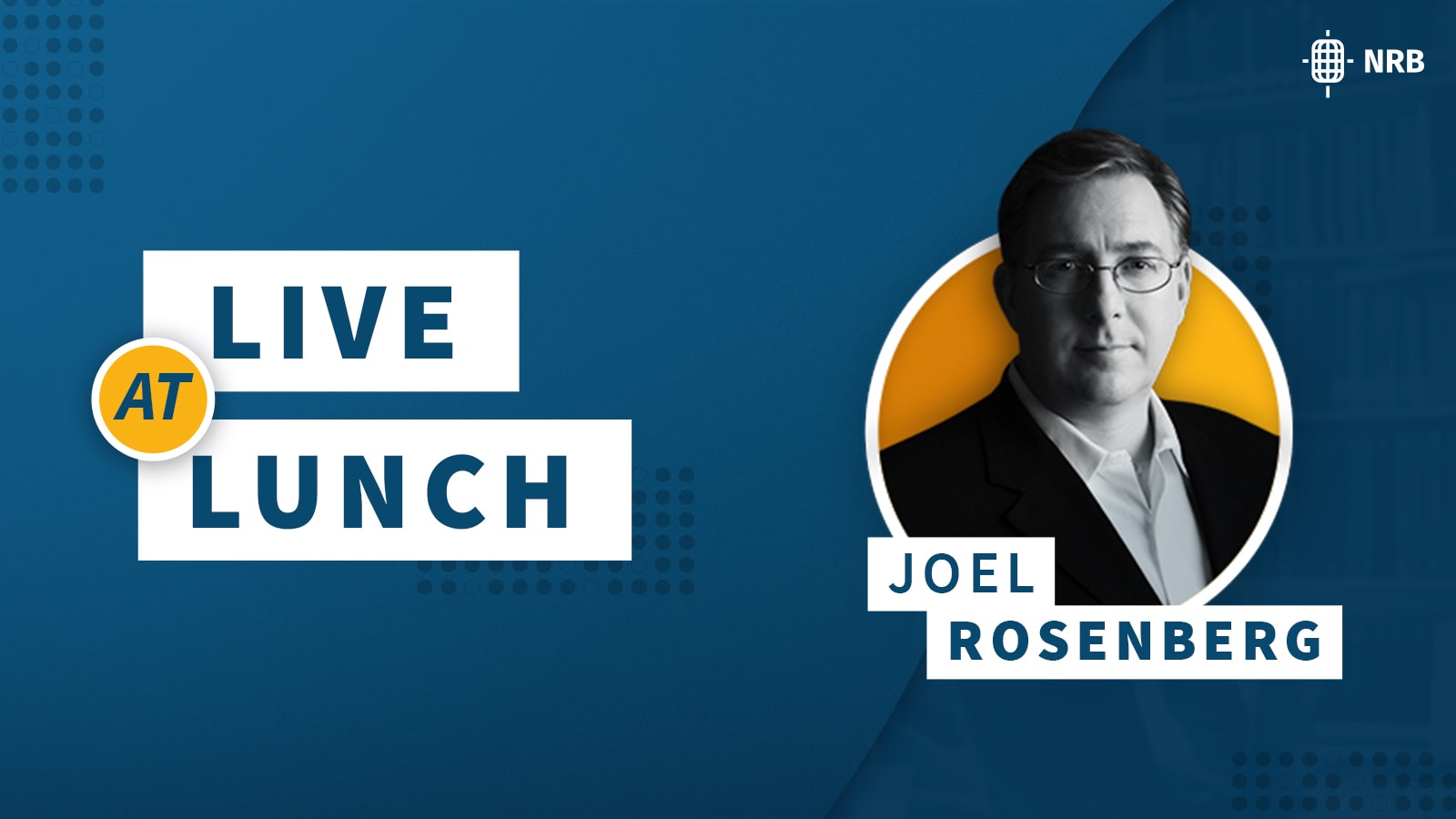 Bestselling author and commentator Joel Rosenberg joined NRB policy strategist, Noelle Garnier, and the NRB audience this week for the November “Live at Lunch” webinar and a conversation on the future of peace and religious freedom in Israel and the Arab-Muslim world.

Rosenberg has been in the room and at the table at a historic time for peace and religious liberty in Israel and the Arab-Muslim world. During this live webinar event, Rosenberg discussed his latest book, talked about the situation in the Middle East, and answered some questions of special interest to Christian communicators.

Rosenberg’s latest book, “Enemies and Allies,” was released this September, marking twenty years since the terrorist attacks of Sept. 11, 2001. In the book, Rosenberg illuminates critical factors behind the rapidly shifting landscape in Israel and the Arab-Muslim world. Rosenberg noted in the conversation that while many Americans focused on domestic affairs in the last few years, the Middle East has undergone rapid change. The United States’ enemies are not the same enemies as twenty years ago, and leaders that we consider allies today weren’t necessarily allies twenty years ago.

In “Enemies and Allies,” Rosenberg explores the Abraham Accords—historic, game-changing peace agreements between Israel and four Arab countries—and what has changed over the past two decades to make the Accords possible. He takes readers into the room with world leaders such as the king of Jordan, the president of Egypt, the President of the United States, and others, as he explains why Arab attitudes toward the U.S. are changing so much and who are the most serious threats to the U.S., Israel, and Arab allies today. He also evaluates the current conditions of religious freedom in the region. As Rosenberg gives insights into his conversations with world leaders, he allows readers to hear how these leaders see the situation on the ground in the Middle East two decades after 9/11.

“God has opened up crazy doors for me to be seated with the most powerful, consequential, and controversial leaders in the Middle East and get them on the record,” Rosenberg said.

These open doors have given Rosenberg the opportunity to help leaders, thinkers, and everyday citizens gain an understanding of what’s going on in the Middle East, and his book renders these issues accessible even without preliminary knowledge of regional geopolitics.

Rosenberg devotes a section of his book to identifying the most serious, rising global threats, particularly the evolving Iran-Russia-Turkey axis of power. As a Christian communicator, Rosenberg sees it as his responsibility to be a faithful “watchman on the wall” as referenced in Ezekiel 33.

“If you see a threat coming to a nation, and you don’t say anything, you’re guilty,” Rosenberg said. “You need to say things. You need to warn people.”

While there are many positive changes happening in the Middle East right now, Rosenberg said that he hopes that his book is a resource for those who need to pay attention to just how dangerous things are in the Middle East.

Through resourcing Christians to think about peace and relations in the Middle East and through direct conversations with world leaders, Rosenberg has played a one-of-a-kind role in pursuing peaceful relations with and among Arab-Muslim nations. He has led six delegations of evangelical leaders to meet with various leaders of Arab-Muslim countries, and each of these delegations were warmly received by its host country.

But each of these six delegations was a part of something larger that is going on in the Middle East. As a set of factors are forcing Arab leaders to fundamentally rethink how they see the world, they are re-evaluating who their enemies and allies are. And by necessity, a part of this fundamental reassessment includes rethinking relationships between Muslims, Jews, and Christians.

“The situation on the ground in these countries is still challenging to the average follower of Jesus Christ,” Rosenberg said.

But he is encouraged by kings and crown princes, presidents and prime ministers who are asking him to talk about the most sensitive issues of human rights, religious freedom, peace with Israel, and threats from radical Islamism.

“I don’t want to paint a rosy picture that life is perfect and now totally good for followers of Jesus on the ground in the Middle East and Northeast Africa,” Rosenberg said. “But is it changing for the better? Yes.”

Rosenberg encouraged Christian communicators who are engaging the public on controversial issues while working to maintain the integrity of their message to be cognizant of how they speak truth to power. The opportunity to be in the room with influential and powerful leaders can be dazzling—and silencing. On the other extreme, one may be tempted to confront issues strongly, but in so doing, destroy a relationship and squander the opportunity for dialogue. Christian communicators must pursue boldness and humility, holding fast to convictions despite the potential for criticism.

Rosenberg is excited about the opportunity to partner with Christian communicators at NRB to advance the gospel of peace in the Middle East. Last year, Rosenberg launched two news websites called All Israel News and All Arab News. Rosenberg said that the goal is for these websites to provide a unique analysis of what’s happening in Israel and the Arab-Muslim world, what it means, and why it matters—particularly to Christians. You can sign up for a free newsletter on these sites to stay up-to-date on what is happening in the Middle East. Rosenberg also invited news agencies and other Christian communicators to consider posting direct links from these sites.

“Let us be your trusted resource because your readers, viewers, and listeners want to know what’s happening, and they want to know whom to trust,” Rosenberg said.