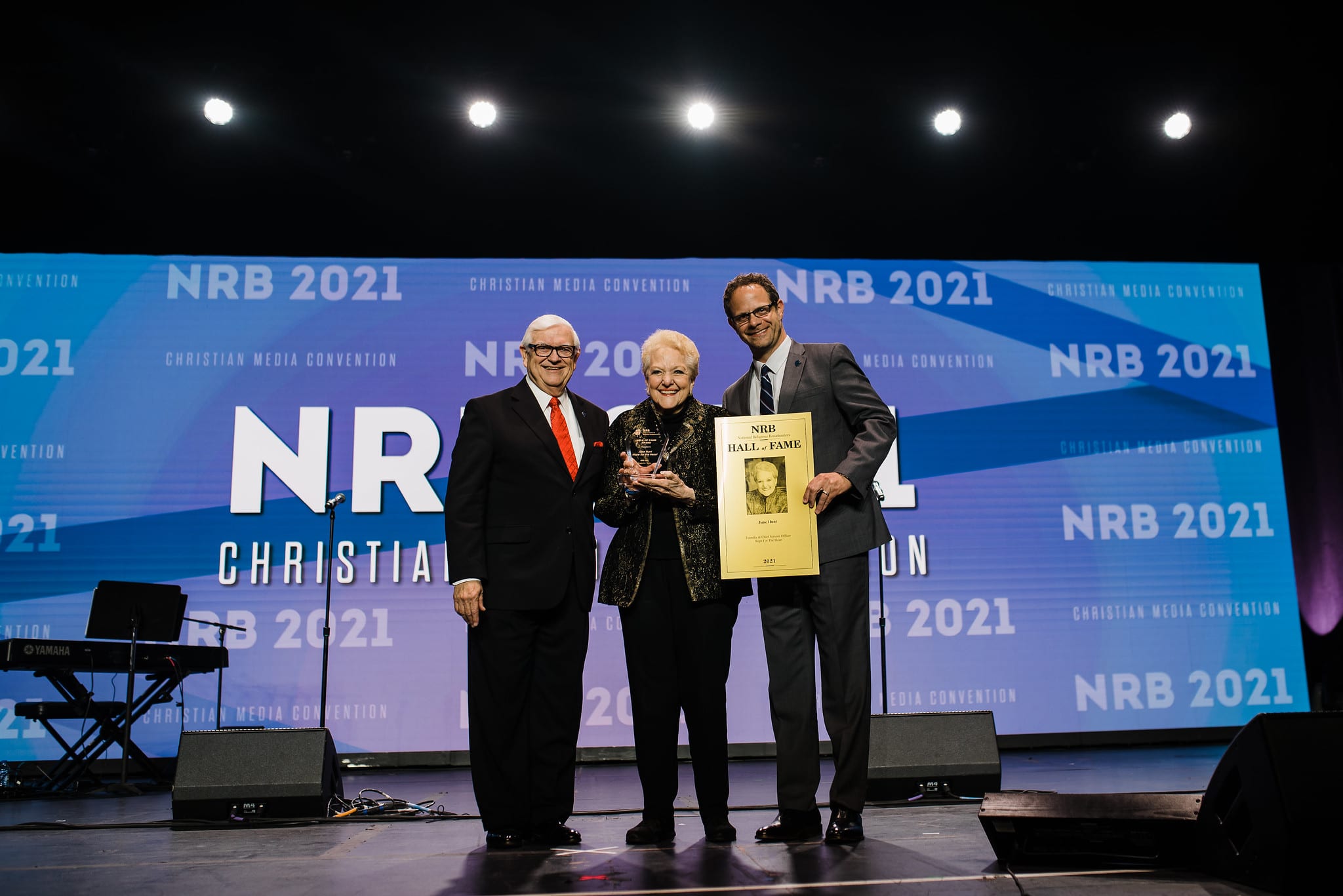 NRB 2021 concluded on Thursday, June 24 with a closing gala to celebrate a week of networking, learning, and working together to advance the gospel.

The evening featured live performances from Selah. With more than half-a-billion streams, over four million albums sold, and eight GMA Dove Awards to their credit, Selah’s Allan Hall, Amy Perry, and Todd Smith have earned a reputation for not only delivering compelling new anthems but also for reviving great hymns of faith. With their soaring harmonies and distinctive lead vocals, they have breathed new life into timeless musical treasures that have ministered to believers for generations.

Dr. Frank Wright, President and CEO of D.J. Kennedy Ministries, spoke representing the ministry as a closing gala sponsor. Abby Johnson also spoke representing And Then There Were None, another sponsor of the event. Miller thanked convention attendees, exhibitors, sponsors, and NRB staff for making NRB 2021 possible and faithfully contributing to the advancement of the gospel.

The evening also featured presentations of the NRB Special Service Awards presented by Ron Harris, 2020 NRB Chairman, and Brett Larson, NRB Secretary. They announced NRB’s new executive committee as voted upon on Monday at NRB 2021 and presented the 2021 special service awards. This year’s special service award winners are as follows:

Dr. Os Guinness gave the keynote address at NRB 2021’s closing gala. Guinness is an author and social critic. Born in China and educated in England, he has a DPhil from the University of Oxford. Since 1984, he has lived in Washington D.C. with his wife Jenny. He has written or edited more than 30 books, including his bestselling book “The Call.” Closing gala attendees received a copy of his latest book “The Magna Carta of Humanity: Sinai’s Revolutionary Faith and the Future of Freedom.”

“Os Guinness shared a stirring call to faithfulness and courage in an age of instability and compromise, urging Christian broadcasters to communicate the message of truth to a desperately needy world,” Dan Darling, Senior Vice President of Communications at NRB said.

Guinness talked about different revolutions that have happened throughout history and challenged Christians to faithfully press on in their pursuit of truth and justice. He said that whether or not something was revolutionary was relative, but what mattered was what the revolution was rooted in—whether Scripture or enlightenment or anything else.

“We agree that there is injustice in the world,” Guinness said. “The difference is how we address it and remedy it.”

He said that Christians have a unique opportunity to call out injustices in the world in a way that leads to repentance, forgiveness, and ultimately reconciliation.

Guinness encouraged these communicators that justice and freedom has to come with a reformation of words, and Christians have the opportunity to lead in that pursuit. But Guinness also acknowledged the need for leadership in this generation. He said that there is no Lincoln today, but we need leaders who can address the reality and lead the nation going forward.

He said that he prays every day for the Lord to raise up leaders in the church and throughout the nation such that God will get the glory through them.

“Thank God for NRB and all that you are doing small and large scattered throughout the world,” Guinness said. “Our purpose is to serve God’s purpose in this generation.”

Miller closed the evening clearly excited about an incredible week at NRB 2021. He said that the networking, workshops, and worship were great, but that there was something even better about NRB 2021.

Miller encouraged attendees to continue in faithfulness because people’s hearts will only be changed when they come to a knowledge of their creator and savior.

“If we’re going to preach the Gospel, then NRB has been put here to keep that access open,” Miller said. “Our job is to keep your access open and fight in those places that would shut us down.”

NRB is committed to equipping its members, but only so that those members can continue in the work of advancing the gospel.

NRB 2022 will be held in Nashville, Tennessee at the Gaylord Opryland Resort & Convention Center on March 8-11. Stay tuned for more information and details on how to register.