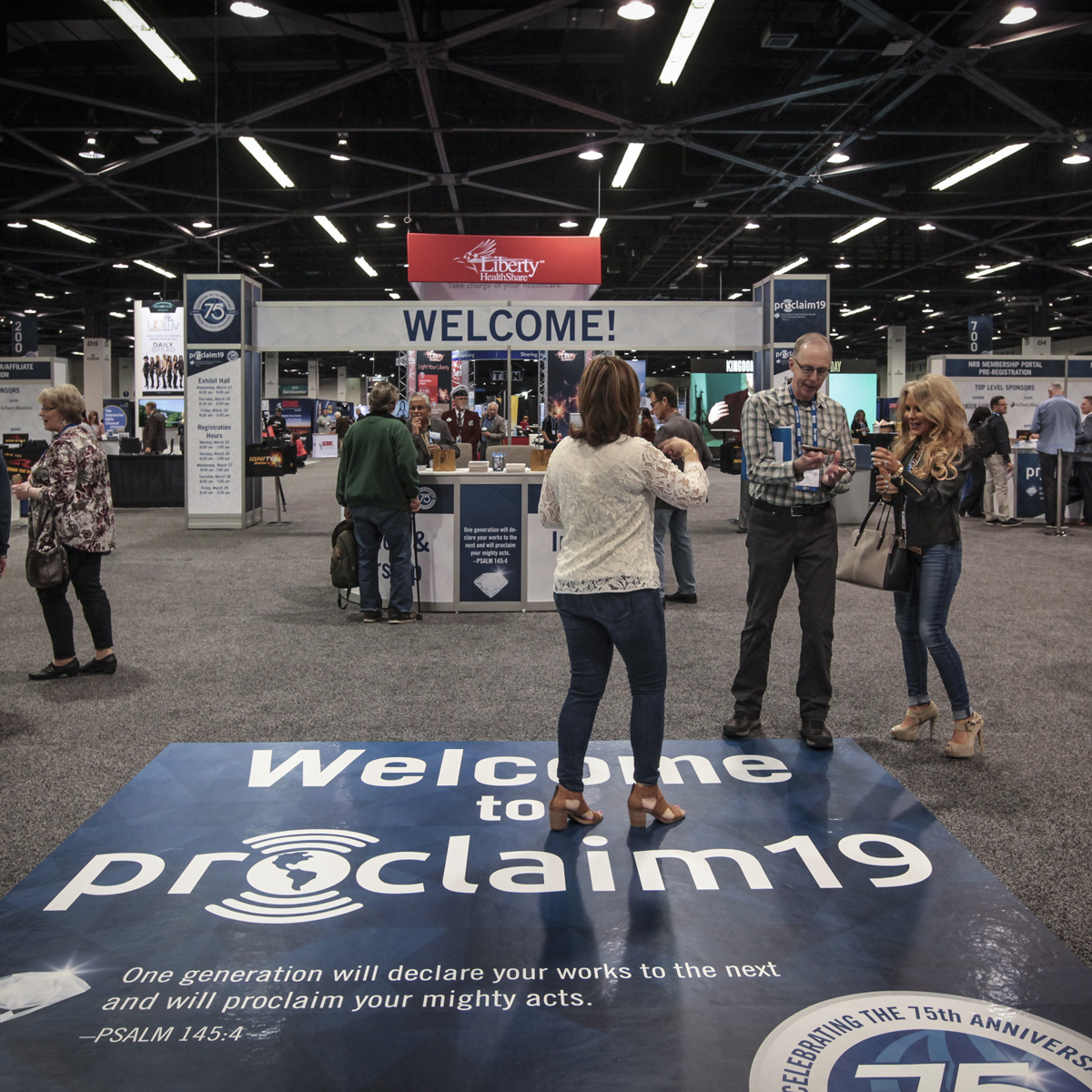 Christian communicators from across the nation and around the world gathered in Anaheim, California, March 26-29 for Proclaim 19, the NRB International Christian Media Convention.

They also gathered to celebrate the 75th anniversary of National Religious Broadcasters under the theme of Psalm 145:5: “One generation will declare your works to the next and will proclaim your mighty acts.”

NRB was founded in 1944 after evangelical Christian broadcasters were taken off the national radio networks of that time and only allowed access to small independent stations with very limited audiences.

“You would think that the idea of hearing the voice of God would be one of the most important things that you would want to have blossoming and growing,” said Michael Little, NRB’s chairman of the board, during the Opening Session of Proclaim 19. “But some of the corporate elites, some of the people who controlled the media outlets said, ‘We don’t really want those religious broadcasters on our air.’”

Since then, NRB has grown to become an international association of Christian communicators with more than 1,100 member organizations reaching millions of viewers, listeners, and readers. And every year since that first gathering in Columbus, NRB has held its annual convention, which today is the largest nationally and internationally recognized event dedicated solely to assisting those in the field of Christian communications. (Click here, here, here, and here for examples of international coverage of Proclaim 19.)

This year, the Convention also proved to be a major launch pad for the burgeoning Christian film industry, with six film screenings taking place at Proclaim 19 and the unveiling of an unprecedented slate of faith-based film projects to be developed and produced by Kingdom Studios, the Diamond Sponsor of Proclaim 19, in partnership with global content leader Lionsgate.

During a two-hour, keynote event held to formally reveal the studio slate, Kingdom Studios co-founders and acclaimed directors Jon Erwin and Andrew Erwin (I Can Only Imagine, Woodlawn) told a packed crowd that their new company was already ramping up production on the slate, developing much of the material in-house while also working with talented storytellers.

New films announced by Kingdom Studios include I Still Believe, the inspirational drama chronicling the true-life story of Christian music mega-star Jeremy Camp; Jesus Revolution, which tells the true story of a national spiritual awakening in the early 1970s and its origins within a community of teenaged hippies in Southern California; Apostles: Resurrection Of Christ, the first in a trilogy of films inspired by the Bible that will create a new cinematic universe of biblical stories; and The Drummer Boy, a period musical being developed in association with the two-time Grammy Award winning duo for KING & COUNTRY.

The keynote super session, which capped the Convention’s one-day TV & Film Summit, marked the first time a studio-backed production company announced a slate of films it was producing for the faith audience.

“We are thrilled that Kingdom Studies announced its slate of new projects during Proclaim 19,” said Troy Miller, NRB’s executive vice president and COO. “The partnership with Kingdom demonstrates that there is no other place in the Christian world that has the platform of NRB to launch such an ambitious project.”

Also shown in advance to Proclaim 19 attendees were six new faith-based films – including the recently released, surprise box office hit Unplanned – and two new television series that were screened during the Convention.

The films included Breakthrough from producer DeVon Franklin and starring Chrissy Metz; No Safe Spaces with Adam Carolla and Dennis Prager; Roe v. Wade from executive producer Dr. Alveda King; The Children of Shanghai, a documentary narrated by Bear Grylls; Overcomer, the latest film from the Kendrick Brothers; and Unplanned, the film adaptation of Abby Johnson’s best-selling book of the same title. The new television series were The Chosen from director Dallas Jenkins, son of Left Behindauthor Jerry B. Jenkins, and Jesus: His Life, History’s new eight-episode series.

“Meeting in the L.A. area, it was appropriate that film and television screenings took center stage at Proclaim 19,” noted Miller.

“Proclaim 19 was a star-studded event and a great success that showed us how promising the future is for Christian media and for National Religious Broadcasters,” he added.

In addition to Film and TV, other media and ministry groups were represented and catered to at the Convention. Proclaim 19 featured in total four summits – the Great Commission Summit (March 25), TV & Film Summit (March 27), Radio Summit (March 28), and Digital Media Summit (March 29). There were also “101 sessions” in church media, radio, film, and TV.

At the Great Commission Summit, which caters to those interested or involved in international ministry outreach, Convention attendees were challenged by Johnny Hunt to think of one person with whom they need to share the Gospel.

“Who’s your one?” asked Hunt, senior vice president of evangelism and leadership at the Southern Baptist Convention’s North American Mission Board, which sponsored the pre-Convention summit.

During the Radio Summit, attendees heard from speakers including Mark Ramsey, president of Mark Ramsey Media, who shared five ways broadcasters can move past a simple donation strategy; and Ben Stroup, director of strategic development at the Christian Broadcasting Network, who shared how organizations can scale their fundraising for unlimited growth.

“We have a strong, generous constituent base that is looking for a place to invest their resources that God has blessed them with to grow the Kingdom, and you have the opportunity to capture their imagination and move that forward,” Stroup said.

During the Digital Media Summit, attendees heard from speakers including Nona Jones, Facebook’s director of global faith-based partnerships, who said social media can be used to build God’s Kingdom.

“The goal is discipleship,” said Jones, whose role at Facebook allows her to interact with different religious organizations.

This involves seeing social media as more than a tool for building an audience, and instead using it to build followers of Jesus, she added.

At the Church Media 101 sessions, industry experts shared about storytelling, websites, social media, and mobile. In addition, Dave Kalahar, director of media and broadcasting at Valley Baptist Church in Bakersfield, California, talked about “How to Please Everyone on Your Staff (and Other Impossible Tasks).”

Being a church media communicator can be a bit like juggling cats, he said. Every department or pastor wants their event promoted and communicated to the church, but often don’t understand the importance of lead time, clear communication with the media staff, and the impact of scheduling events on top of other events.

Kalahar noted that church media leaders can’t make everyone happy and give every event the same level of promotion, but he shared five things that will make communicators more effective and efficient.

In addition to the speakers and sessions, another highlight of Proclaim 19 was the Convention’s award-winning Exposition – the largest marketplace dedicated to Christian media professionals, which this year featured around 200 organizations showcasing hundreds of products, services, and resources.

The Expo floor also featured autograph booths, a virtual reality theater, prize drawings, and a Learning Arena, where speakers from among the Convention’s exhibitors presented relevant education and training on new technologies, products and services, and more.

This year, the Exposition was open to attendees for extended periods of time, giving them six additional hours to check out everything the Expo had to offer – from innovative ideas and endeavors to must-have tools and equipment that can help expand and enhance their media efforts.

On the last day of Proclaim 19, several awards were presented to recognize the service and works of outstanding ministries, programs, producers, and leaders.

At the Media Awards Luncheon, awards were presented in the fields of Church Media, Digital Media, International, Radio, and TV.

After receiving the Hall of Fame Award, Evans delivered an address, expressing  gratitude “for the many friends, the many relationships, the many opportunities that have come because of my association with the National Religious Broadcasters.”

“The reasons for having a National Religious Broadcasters association is as relevant today as they were 75 years ago,” he said.

“And the challenges to Christian voices speaking freely on today’s platforms of communication are many,” Miller added, echoing a resolution passed on the opening day of Proclaim 19 by the NRB Board of Directors.

The resolution, in part, stated: “On its 75th anniversary, it is clear that NRB’s work is needed now more than ever, as major opportunities and challenges remain to achieve full access to the fast-developing worlds of electronic media in the United States and around the world.”

It concluded with a call to the association’s members “to pray and to ready themselves for struggles ahead to ensure freedom and fairness in access to all electronic media in order that the Gospel of our Lord Jesus Christ may be proclaimed boldly on those platforms to listeners, viewers, and readers.”

NRB’s next Convention will be held at the Gaylord Opryland Convention Center & Resort in Nashville, Tennessee, February 25-28, 2020.

This report was compiled by NRB Staff, with contributions by writers Tom Strode, Erin Roach, Michael Smith, and RuthAnne Irvin.