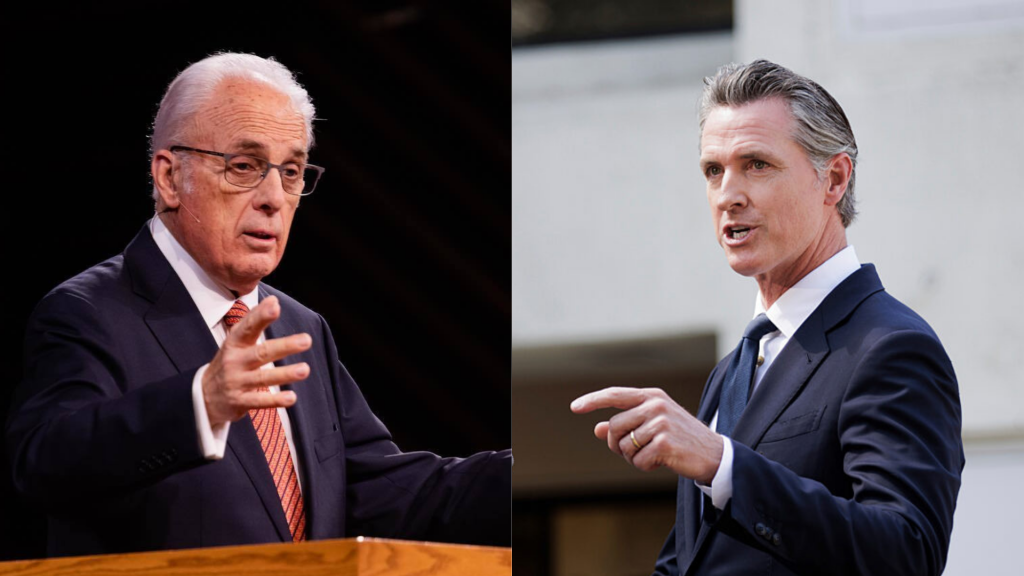 Governor Gavin Newsom of California has long attracted attention with his extreme, so-called “progressive” positions on social issues such as homelessness, crime, and abortion. Newsom has signed thirteen abortion-related bills into law, including such legislation as Assembly Bill 2223, which abolishes requirements that coroners investigate stillbirths, miscarriages, and abortions; Assembly Bill 1242, which prohibits California law enforcement from taking an individual into custody on an out-of-state warrant for providing abortion services; and Senate Bill 1245, which provided $20 million to the Los Angeles County “Abortion Access Safe Haven” program.

“To any woman seeking an abortion in these anti-freedom states: California will defend your right to make decisions about your own health,” Newsom tweeted.

One of the billboards features the words “Need an abortion? California is ready to help.” The design references—and misquotes— Mark 12:31: “Love your neighbor as yourself. There is no greater commandment than these.”

The Newsom campaign, in total, spent $100,000 to run 18 billboard ads across the seven states.

The message did not go unchallenged by Christian leaders. On Wednesday, September 28, John MacArthur, senior pastor of Grace Community Church in Sun Valley, California, whose teaching ministry Grace to You is a longtime NRB member, penned an open letter denouncing the “diabolical” impact of Newsom’s worldview, writing:

The diabolical effects of your worldview are evident in the statistics of California’s epidemics of crime, homelessness, sexual perversions (like homosexuality and transgenderism), and other malignant expressions of human misery that stem directly from corrupt public policy. I don’t need to itemize or elaborate on the many immoral decisions you have perpetrated against God and the people of our state, which have only exacerbated these problems. Nevertheless, my goal in writing is not to contend with your politics, but rather to plead with you to hear and heed what the Word of God says to men in your position.

MacArthur identified the billboard campaign as a sign of deep, personal rebellion against God and a shameless perversion of Scripture. He admonished the governor, “You further compounded the wickedness of that murderous campaign with a reprehensible act of gross blasphemy, quoting the very words of Jesus from Mark 12:31 as if you could somehow twist His meaning and arrogate His name in favor of butchering unborn infants.”

Appealing to the governor to repent, MacArthur wrote, “My concern, Governor Newsom, is that your own soul lies in grave, eternal peril.” In closing a recent sermon, MacArthur called on the congregants of Grace Community Church and Christians across the nation to “pray for the salvation of the governor.”

Phil Johnson, executive director of Grace to You, commented that “This kind of thing is happening with increasing frequency,” adding,

Politicians with no real interest in what the Bible actually teaches seem to think they can cajole God’s people and marshal support for some ungodly cause by wrenching a Bible verse out of context and turning it against clear biblical principles. Newsom is by no means the first far-left American politician to do this. But the way he did it (literally billboarding his blasphemy from one end of the continent to the other) was particularly egregious. Pastor MacArthur represents multitudes of Christians who have had enough. We are simply fed up with seeing and hearing elected officials misuse the Word of God in such an arrogant and impious fashion. Newsom needed the admonition, and I hope he heeds it.

In this time of hostility to the Christian message, NRB commends Christian leaders for communicating Biblical truth to the culture and standing against blatant misuse of the word of God.