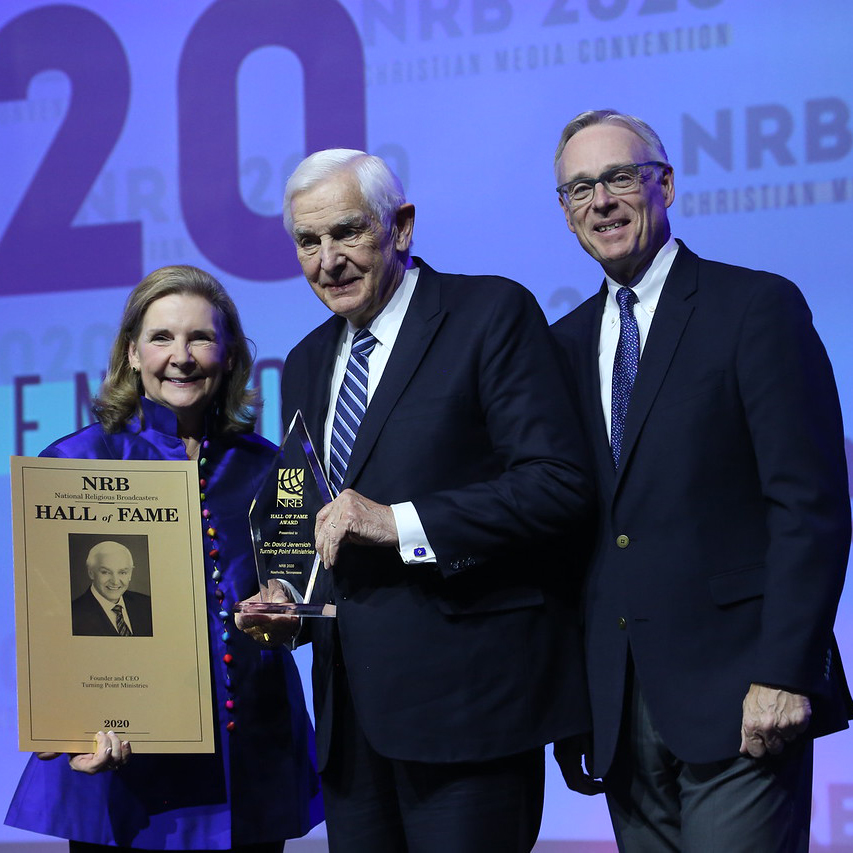 The NRB Hall of Fame stands as a witness for current communicators, a showcase of warriors for Christ who live exemplary lives of valor and compassion, blazing trails and leaving paths for succeeding generations to follow. Each year, NRB's most prestigious award is presented to an individual NRB member for invaluable contribution to the field of Christian communications, exhibition of the highest standards, and evidence of faithfulness in Christ.

“We’re so grateful to be a part of this organization and to be involved in the wonderful calling of taking the Gospel of Jesus Christ to every corner of the world,” said Jeremiah in receiving the award during the NRB 2020 Closing Gala with Special Service Awards on February 28.

“And it’s really a tremendous honor to look back on the list of people who are in the Hall of Fame and feel any kind of rightness for me to be with that group, but I’m so proud to have been here tonight and to receive this honor,” he continued. “And we accept it as unto the Lord with gratitude. And thank you all for what you do, because what we’re doing today is more important than it’s ever been. We must not lessen our efforts but keep going forward for the cause of Christ.”

In 1981, Jeremiah and his family moved to California, where he became Senior Pastor of Scott Memorial Baptist Church, which is now Shadow Mountain Community Church – one of the largest churches in San Diego County.

As Jeremiah began his ministry at Shadow Mountain, he felt God’s calling to continue the broadcast ministry he started in Fort Wayne. In 1982, Turning Point Ministries became a reality.

Today, Turning Point's 30-minute radio program is heard on more than 2,200 stations worldwide. And its television program is now seen around the world through cable and satellite technology, as well as on terrestrial stations across the United States. Conservative estimates suggest that close to 200 million homes around the world have access to Jeremiah's Bible teaching each week. Turning Point Television airs on national networks including TBN, ION, Daystar, INSP, USA, Lifetime, UPtv, and ABC Family.

The NRB Hall of Fame Award was one of 27 awards that were presented during the NRB 2020 Convention, which took place February 25-28 at the Gaylord Opryland Resort & Convention Center in Nashville, Tennessee. For the complete list of 2020 award recipients, click here.