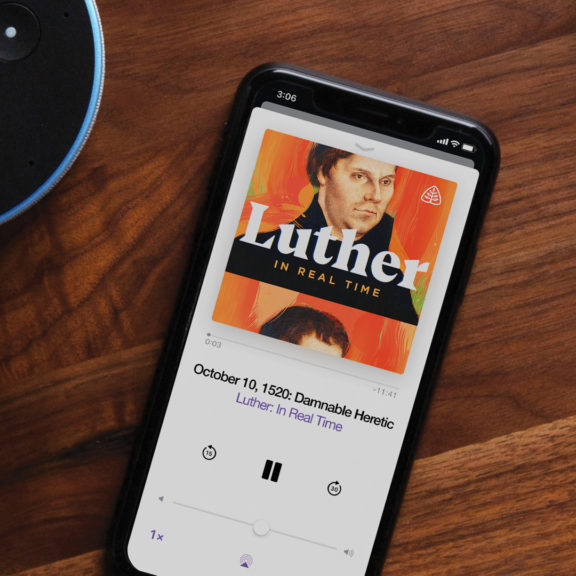 Luther: In Real Time enables listeners to walk in Martin Luther's footsteps five hundred years to the day – from his heresy charges on October 10, 1520, to his famous stand for God's Word at the Diet of Worms in April 1521.

“Carefully researched, each episode draws listeners into the action of Luther's life five centuries to the day,” Larson reported. “This production is not mere entertainment; it is a close look into defining moments for the Protestant Reformation. Church history provides vivid reminders of God's faithfulness to His church, and this short period in Luther's life was particularly full of dramatic twists and turns.”

The first episode of the podcast, released October 10, takes place three years after Luther hammered his Ninety-Five Theses to the Castle Church door at Wittenberg. It begins with the envoy of Pope Leo X knocking on Luther's door with a dire message from the most powerful man on earth. This sets in motion events that God will use to change the world.

As the podcast was created to provide a real-time experience of Luther's journey from an anguished Augustinian monk to the great German Reformer, each new episode will be released on the five-hundredth anniversary of important moments in Luther's life. This means that new episodes will be released on varying days of the week, though listeners can expect to hear a new episode every week.

“We encourage Christians to listen with their families and to share this podcast with people of all ages so that as many people as possible can hear—in Luther's own words—what Protestants are protesting and why it still matters today,” he concluded.