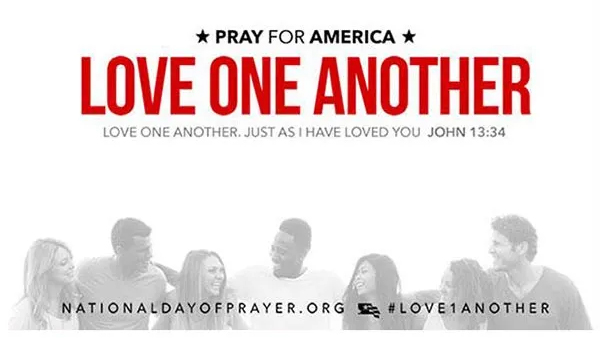 Dr. Ronnie Floyd, president of the National Day of Prayer, announced Tuesday that the theme of the 2019 observance on Thursday, May 2, will be “Love One Another,” based upon the words of Jesus in John 13:34, which says, “Love one another. Just as I have loved you.”

“Love can change America,” Floyd said in announcing the theme to a gathering of leaders from across the country.

The pastor and former Southern Baptist Convention president said the theme is one that has potential to engage all Americans because it is biblical, relevant, clear, simple, and understandable.

The National Observance in Washington, D.C., meanwhile, was broadcast in 200 countries of the world and 1.5 billion homes via Daystar TV, as well as through God TV and 120 radio stations nationwide. The video recording of the observance, furthermore, has had more than one million views on Facebook from 38 countries around the world. In addition, the Billy Graham Evangelistic Association tracked more than 3,700 persons who came to faith in Jesus Christ largely due to the national observance and its public appeal to come to Jesus Christ.

“2018 was epic and unprecedented with response, largely due to God’s favor,” Floyd said.

Floyd urged believers across the nation to do everything they can to call people in the United States to unite in public prayer in the days leading up to and on the National Day of Prayer, May 2, 2019.

More specifically, Floyd asked everyone to share and advance the message through social media using the official hashtag for the day of prayer: #love1another.

“I need you to do something greater than that,” he continued. “I need you to begin to live it. And I need you to help me call America to it. And forward it to the 350,000 churches and 200 denominations that are in desperate, desperate need for it.”

The National Day of Prayer was created in 1952 by a joint resolution of Congress, and signed into law by President Harry S. Truman. In 1988, the law was unanimously amended by both the House and the Senate and signed into law by President Ronald Reagan on Thursday, May 5, 1988, designating the first Thursday of May as a day of national prayer. Every president since 1952 has signed a National Day of Prayer proclamation.

Visit www.NationalDayofPrayer.org for more information, including how to sponsor an event in your community, how to become a volunteer, how to order resources to help promote an event in your area, and how to support the National Day of Prayer financially.