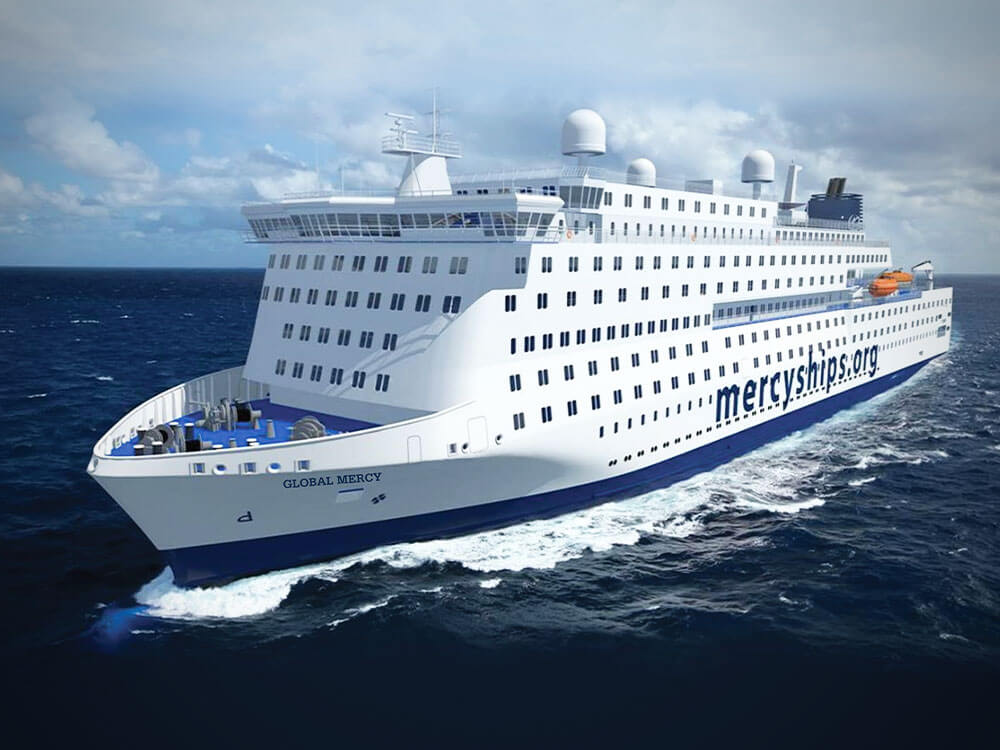 When Mercy Ships began 43 years ago, about 70% of the world’s population lived within 100 miles of a port city. Mercy Ship founder, Don Stephens, saw this as an opportunity to offer hope and healing to people all over the world by using hospital ships to bring medical care into port cities.

As Mercy Ships sends out hospital ships filled with volunteer professionals who provide safe, life-changing surgeries to people in need, one of their primary focuses is medical capacity building, which involves training and equipping people to be able to provide medical care in their own countries.

Gary Brandenburg, the international spiritual development officer at Mercy Ships, said that he has seen young children see their mothers for the first time in their lives after relatively simple surgeries that doctors in their own countries just didn’t know how to perform. These life-changing surgeries are performed alongside local doctors in order to equip them to perform the same kind of surgeries long after Mercy Ships has left the port.

“Our ships are just the shiny object that everybody sees, but behind that, there’s a lot of activity in raising the level of care in all of these countries,” Brandenburg said.

The inequity of medical resources throughout the world motivates Mercy Ships to help lift the quality of care and train local healthcare professionals. In the United States, a doctor shortage leaves us with one doctor for every 333 people. In Liberia, there is one doctor for every 14,000 people, and often these doctors don’t have expertise with surgeries or specialty needs.

“We want the Senegalese to be able to care for the Senegalese,” Brandenburg said. “We’re equipping them and providing opportunities so they can help themselves. We don’t trade their dignity for what we’re able to provide for them. We want them to have the dignity of being able to serve their people.”

But it takes a whole team to pursue this mission of following the 2000-year-old model of Jesus to bring hope and healing to the world’s forgotten poor. That’s why Mercy Ships is a part of NRB.

“We want to inspire people to be a part of the solution to [the problem of medical inequity],” Brandenburg said.

One way that you can partner with Mercy Ships to share the message of hope and healing to the world’s forgotten poor is by utilizing the resources on their website. Be equipped and help equip your audiences to give to support the ministry, to go be a part of the ministry, and to pray for the ministry.

There are numerous opportunities to volunteer with Mercy Ships, and these opportunities extend beyond the medical field to cooks, engineers, deck officers, teachers, and more. With commitments ranging from two weeks to six months, there is a place for everyone.

NRB’s reach has been instrumental in helping Mercy Ships share its message, and Mercy Ships is asking Christian communicators to help them tell the story of life transformation for people who would otherwise never have access to medical care.

“We’re partnered with NRB because of the great possibilities to influence people for the good and for the gospel,” Brandenburg said. “Join us in being the hands and feet of Jesus.”

Mercy Ships is a part of the NRB community and has a daily short feature produced to encourage listeners with sharing/showing mercy.  You can find more information here.

In addition, the organization offers public service announcements that tell the story of the life-transforming work of Mercy Ships and would be grateful for those stations interested in airing these PSAs. The portal for the PSAs is here.