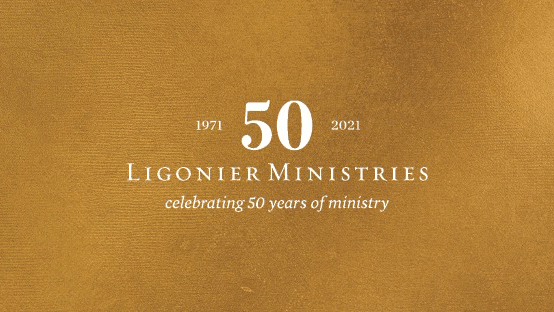 It was August 1971. Ligonier Valley Study Center in Pennsylvania was opening its doors for the very first time for students to study the Word of God and theology.

Dr. R.C Sproul had noticed that in culture and in the church, there was a lot of confusion and misunderstandings about who God was. And while he was bored teaching seminary classes, he was energized each week as he taught Sunday School to lay professionals who had a strong desire to study God’s Word and theology. Sproul decided to start Ligonier with the purpose of equipping people to have a vision of what the Bible says about God and who God is.

Now, it’s August 2021—50 years later. Sproul dedicated his life to helping people grow in their knowledge of God and his holiness. Though Sproul died in 2017, the teaching ministry that he began 50 years ago has continued, through the work of Ligonier’s teaching fellows, to provide discipleship content for the church.

Ligonier’s mission is “proclaiming, teaching, and defending the holiness of God in all its fullness to as many people as possible.”

Nichols said that everything that Ligonier does arches back to the content piece of this mission statement. No matter the medium, Ligonier’s message is always to proclaim, teach, and defend the holiness of God. The second half of the mission statement, however, speaks directly to the question of medium and stewardship of ministry resources—both dollars and time.

“We’re constantly evaluating the ways in which we can optimize new technologies and media to, in fact, proclaim to as many people as possible,” Nichols said.

For example, Ligonier is currently reaching people in closed countries by loading USB drives with resources for churches and distributing those throughout the closed country. Another example of this is how Ligonier is distributing audio content. While Ligonier still sees the value of terrestrial radio, they are also recognizing the value of the internet and on-demand resources, and through the years have utilized these media in a variety of ways.

“To us, the mission statement speaks both to the message and to the medium,” Nichols said. “Ultimately we see ourselves as stewards—both of the content itself and the resources that we deploy to communicate the message.”

Thinking in terms of the strategic use of media to proclaim their teaching content to as many people as possible has been a hallmark of the ministry for the past 50 years. In fact, they led the way in video, producing their first teaching video series in 1975—on the cutting edge of that technology.

Besides that, Nichols said that one of the things he is most proud of as he reflects on Ligonier’s 50 years of ministry is the consistency of their teaching.

“Certainly the media has changed,” Nichols said. “But while those things change, there’s a consistency to the message that not all Christian organizations can lay claim to.”

Since Sproul’s death, Ligonier has pulled together video clips of Sproul’s teaching from the 1970s through the 2000s and pieced those clips together to create a singular message.

“It reflects his fundamental consistency of message which arcs back to answering the question ‘who is God?’” Nichols said.

For the past 27 of their 50 years of ministry, Ligonier has been an NRB member. Nichols said that there is a direct correlation between strong Christian radio stations and places where people use Ligonier resources. Ligonier’s radio outreach, Renewing Your Mind, first went on the air in 1994, and to this day, where Renewing Your Mind has a strong Christian radio presence, you can see the impact of people who are utilizing Ligonier resources.

“Ligonier Ministries is very grateful to NRB as the organization which gave the structure and health and vitality to the Renewing Your Mind program and audience for decades,” Nichols said.

“That was a significant milestone for him in that it recognized the decades of faithful teaching,” Nichols said. “But I think behind that is the lives that were impacted.”

Beyond the work that he had done, this award represented the people who were discipled in godliness or came to faith in Christ under Sproul’s teaching.

“It was a tremendous honor for him,” Nichols said. “What is behind the honor is the recognition of lives impacted.”

And in 2017, just before his death, Sproul spoke at the NRB convention discussing early Luther and giving a charge on the conviction to stand on God’s Word.

But Ligonier actually began celebrating its 50th year in March of this year with their national conference, and this month’s issue of the devotional magazine “Table Talk” is devoted to looking at Ligonier, what it stands for, and looking ahead for what’s next.

And what is next?

The continued growth and theological fidelity of the college. Nichols said that Sproul’s vision for the college was always for it to be a small, intimate community. The college’s goal is to reach 200 students, and they have recently added on-campus housing for the first time.

Nichols said that the ministry is recognizing the growth of the global church and is continuing to seek opportunities to emphasize global outreach through the ministry.

“As we survey these places and the needs of these places, we want to make biblical and theological resources available to the church in these languages,” Nichols said.

NRB is grateful for Ligonier’s work and ministry and is honored to have them as NRB members.