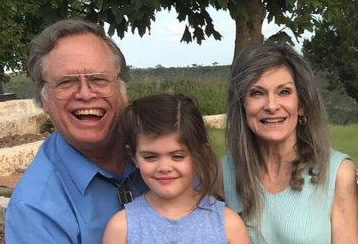 Max Greiner Jr., whose artwork has been a staple at NRB Conventions for many years, is celebrating 40 years in the art business.

“Thanks to you and God, Sherry and I have actually made a living from my art for 40 years! WOW!” wrote Greiner in an email to his supporters on behalf of him and his wife, Sherry.

Today, Greiner’s art is in all 50 states and in more than 80 countries. His work includes drawings, paintings, sculptures, jewelry, and fine art gifts.

Greiner’s sculptures also appear in The Coming King Sculpture Prayer Garden in Kerrville, Texas, which he says he was called to create back in 2001.

For many years, the garden has been Kerrville’s top year-round tourist attraction, drawing visitors even as it was under construction. Three years after its official opening, the garden is now reportedly visited by an average of 12,000 people a month – from all 50 states and more than 70 countries.

According to Greiner, most visitors say they come to experience the presence of God and to see the world-class art, landscaping, and the unique 77’7” open cross sculpture, called “The Empty Cross.” The Coming King Foundation (TCKF) – the nonprofit established in 2004 to create sculpture prayer gardens across the United States and other countries “for the purpose of bringing honor and souls to Jesus Christ” – promotes this unique, two-million-dollar contemporary sculpture as the most symbolic cross sculpture in the world.

According to the Texas Department of Transportation, more than 13 million vehicles pass the blood colored Cor-ten steel cross on IH-10 each year.

“This means that approximately 34,564,478 people a year see the unique art landmark from the highway,” Greiner reported.

In recognition of the 40th anniversary, Greiner is offering special low prices on his small sculptures and sterling silver jewelry until Christmas. More information on the sale and the Greiners’ story is available at www.maxgreinerart.com.

PHOTO ABOVE: Max (left) and Sherry (right) Greiner pose for a photo with one of their grandchildren. Photograph courtesy of The Coming King Foundation.