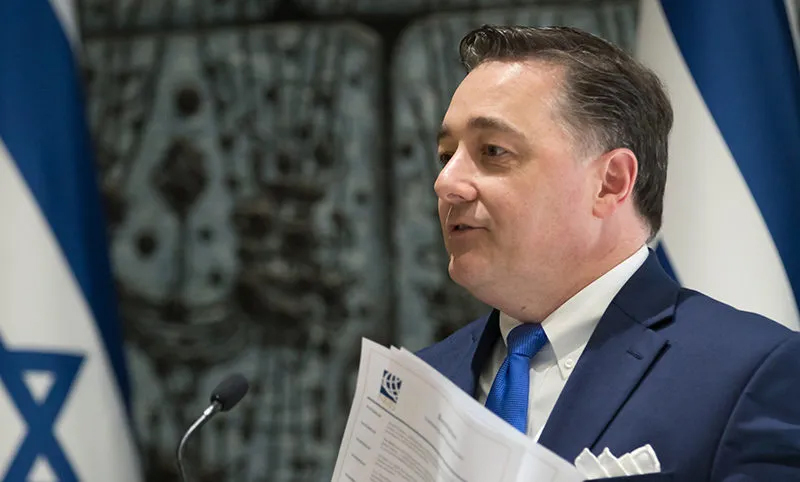 Netanyahu to Christian Media Summit: ‘Tell The Truth’ About Israel

JERUSALEM – Desiring to convey National Religious Broadcasters’ unwavering support of Israel, Dr. Jerry A. Johnson, NRB’s president & CEO, presented to Israeli President Reuven Rivlin copies of resolutions adopted by the NRB Board of Directors over the last three years during an address to Christian media professionals at the President’s Residence in Jerusalem on October 16.

The presentation took place on the third day of the four-day Christian Media Summit, a conference sponsored by the government of Israel for approximately 180 Christian media representatives from more than 30 nations around the world. In addition to Johnson, NRB representatives to the summit included Board Chairman Michael Little and James A. Smith Sr., vice president of communications. It was the second such gathering, following the event of the same name held in October 2017.

Johnson said NRB members proclaim both the Christian message and “the friendship message to Israel.”

He urged Rivlin to retain the resolutions in the government’s official records. “I want you to feel, how the group feels about you,” Johnson said before reading the text of the 2018 resolution, “Celebrating and Supporting Israel.”

This resolution praised President Trump’s decision to recognize Jerusalem as the capital of Israel and to move the United States embassy to Jerusalem, as well as celebrating the 70th anniversary of the modern state of Israel, urging NRB members to pray for the nation and urging the United States government “to stand steadfastly by Israel.”

Johnson praised Rivlin’s willingness to speak up for religious minorities in Israel, including Christians. “We’re very grateful for your openness and spirit,” he said.

He quoted Psalm 137:5-6, which states, “And I mean this: ‘If I forget thee, o Jerusalem, may my right hand forget its skill. Let my tongue cleave to the roof of my mouth, if I do not prefer Jerusalem above my chief joy.”

Recalling the love of poetry of Rivlin’s father, Johnson adapted a portion of the poem, “Jerusalem,” by William Blake: “Bring me my bow of burning gold; bring me my arrows of desire; bring me my spear; O clouds unfold! Bring me my chariot of fire! We shall not cease from battle strife, nor shall the sword sleep in our hand, ‘til we have built Jerusalem in this fair and pleasant land.”

In response, before beginning his formal remarks, Rivlin told Johnson, “God bless you,” which he later addressed to the entire audience: “To host you here, we can say the words of King David in the phrases of the Bible, ‘Pray for the peace of Jerusalem. May all they who love thee prosper.’ God bless you all.”

In his address, Rivlin spoke about Israel’s “exceptional development” of Jesus’ baptismal site at the Jordan River in Israel, Qasr el Yahud, adding, “I am proud to promote it.”

Noting the ancient connection of the Jewish people to Jerusalem, Rivlin mentioned an archeological discovery – just two weeks prior to the event – of a stone inscription of “Jerusalem” written in Hebrew, dated more than 2,100 years old. “It’s the oldest item we have ever found with ‘Jerusalem’ written as we read it today,” he said.

Rivlin commended the Christian journalists for coming to Israel.

“By coming here, you are showing you care deeply for Israel and for its people, and that you share my hope that peace will come to the Holy Land,” he said. “I believe that it is possible. I believe that we can build understanding between Israelis and Palestinians. I believe we can build confidence between the two peoples. I believe, more than anything, that Israelis and Palestinians are not doomed to live together; we are destined to live together.”

Israel is a “robust democracy,” Netanyahu said, and the “only country in the Middle East where the Christian community thrives and grows,” noting his government’s commitment to protecting not just Christians, but Christian religious sites.

After his address, Netanyahu took questions from both the Christian and other journalists covering the event. In response to a question about whether his government had considered appointing an ambassador to the Christian world, he said, “I think that’s a great idea. I think I’m going to do it,” writing a note to himself and putting it in his pocket.

The subject of truth was also a theme of Friedman’s remarks to the Christian journalists.

Although he does not observe “in a religious sense” the teachings of the New Testament, Friedman said he was “fond of many of its insights,” and particularly Jesus’ statement, “Then you shall know the truth and the truth shall set you free,” quoting John 8:32.

Concerning the purpose of the summit, Nitzan Chen, director of the Government Press Office, leading government sponsor of the event, told CBN News, “We need Christian media because we know that you love us from the bottom of your heart and you don’t need to pretend.”

The theme of this year’s Christian Media Summit, “70 Years of Israel,” marked Israel’s 70th anniversary as a modern state. In addition to Rivlin, Netanyahu, and Friedman, the summit included addresses by the speaker of the Knesset, the mayor of Jerusalem, members of the Knesset (and tour of the parliament’s building), other government officials, and leading experts on Israel, as well as four day-long tour options highlighting Israel’s economy, agriculture, culture, and West Bank settlements. An article in the November 8 issue of NRB Today will feature the West Bank settlements tour.

By James A. Smith Sr., Vice President of Communications