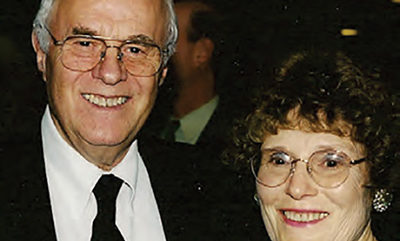 Paul Ramseyer, who served faithfully at Northwestern College (now University of Northwestern-St. Paul) for more than four decades, passed away peacefully on Saturday, January 19, after a short illness.

Ramseyer became connected with Northwestern when Dr. William Riley, the school’s founder and president, asked Ramseyer’s parents to minister at Northwestern in the early 1940s. Though his parents decided to continue their traveling musical evangelism ministry, Ramseyer would later head for Minnesota in 1953 with an acceptance letter into Northwestern Seminary and a job offer at KTIS, Northwestern’s first radio station.

While at Northwestern, Ramseyer held the roles of announcer, program director, KTIS manager, and vice president for radio and outreach before retiring in 1997. Since then, Ramseyer represented Northwestern as he traveled the world working to expand the reach of Christian radio.

“Paul’s tireless work ethic and gracious spirit helped establish KTIS and his love for people allowed him to serve as a mentor and friend to many,” noted Jason Sharp, Northwestern’s senior vice president for media, in a statement to NRB Today.

Ramseyer’s legacy of leadership also includes establishing media partnerships all over the world. He served on the board of HCJB Global (now Reach Beyond), the board of the World Radio Network (later WRN Broadcast), and the board and executive committee of National Religious Broadcasters. Furthermore, Ramseyer received the Minnesota Pioneer Broadcaster of the Year Award in 1993, and he was inducted into the Museum of Broadcasting Hall of Fame in 2001.

“Early interests in radio and in Christian evangelism and mission brought Paul Ramseyer to international recognition as a leader in religious broadcasting,” states the Pavek Museum of Broadcasting in its entry on Ramseyer in the Minnesota Broadcasting Hall of Fame.

Ramseyer’s memorial service will be held at Colonial Church in Edina, Minnesota, on February 8 at 11 a.m.

PHOTO ABOVE: Paul Ramseyer and his wife, Grace.