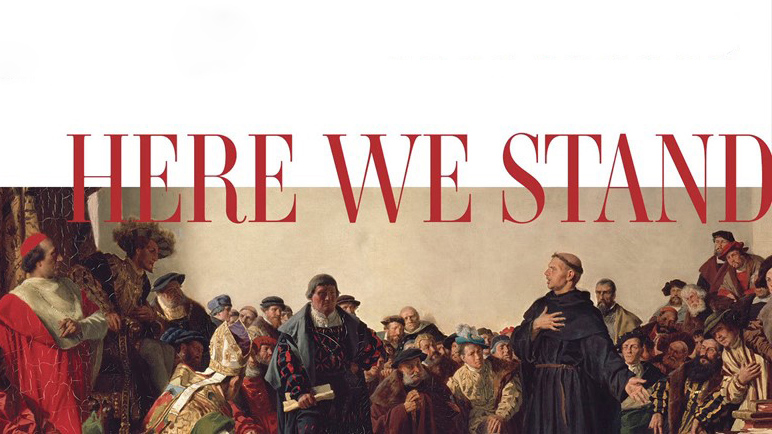 On Tuesday, April 13, Ligonier Ministries hosted Here We Stand, a free online streaming event celebrating the five-hundredth anniversary of Martin Luther’s stand for God’s word at the Diet of Worms.

During this special event, Ligonier Teaching Fellows Drs. Sinclair Ferguson, W. Robert Godfrey, Steven Lawson, Stephen Nichols, Burk Parsons, and Derek Thomas explored the essential truths championed in the Protestant Reformation. Through a series of sessions, these teachers considered the ongoing relevance of the five solas of the Reformation for people of all ages. They were also joined by Nathan W. Bingham, Revs. Ken Mbugua and Sugel Michelén, and Dr. Michael Reeves to address how the gospel is advancing around the world and to equip Christians to pray for the church in Africa, Asia and the Middle East, Europe, and Latin America.

“The Christian faith is rooted in history. We look back because we see Jesus building His church, and we grow in our faith for faithful service in our own generation,” Chris Larson, president and CEO of Ligonier Ministries, said. “Martin Luther’s bold stand for Christ was a pivotal moment. It is not the strength of Luther’s faith that we celebrate, but rather the strength of Luther’s Savior.”

When Martin Luther stood before an imperial council five hundred years ago and was called to recant his teachings, he refused to compromise. As he stood with his conscience bound by the Word of God, his unwavering commitment to the Word of God fanned the flames of reformation in the Western church as it returned to foundational teachings of Scripture that had been obscured by extrabiblical rules and traditions.

“Christians today must likewise stand with conviction in defending the supreme authority of Scripture and the eternal truth of the gospel of Jesus Christ,” Larson said. “It was our founder, Dr. R.C. Sproul, who said, ‘In every generation, the gospel must be published anew with the same boldness, and the same clarity, and the same urgency that came forth in the sixteenth-century Reformation.’ It is our hope that this online streaming event, by the grace of God, may equip the global church toward that end.”

Founded by Dr. R.C. Sproul in 1971, Ligonier’s teaching fellowship consists of theologians, pastors, and scholars. With this event, these teachers continued in Ligonier Ministries’ mission to proclaim, teach, and defend the holiness of God in all its fullness to as many people as possible.

In a recent episode of The Way Home podcast with Daniel Darling, Dr. Stephen Nichols shared more about the life of Dr. R.C. Sproul and what we can learn from Dr. Sproul’s faithful life walking with the Lord and teaching.