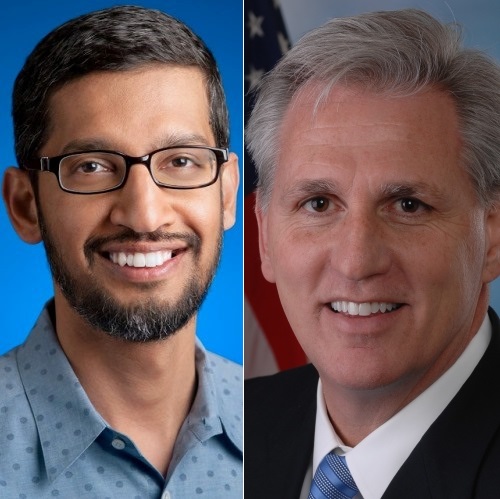 Sundar Pichai, CEO of Google, sat before the House Judiciary Committee this week. In a testament to the importance of this hearing, House Majority Leader Kevin McCarthy (R-Calif.) took the unusual step of providing an opening statement to the committee prior to Pichai’s testimony. McCarthy highlighted Google’s power over 90 percent of all internet searches. “Google’s search engine organizes the entire internet—and by extension, almost all the information in the world,” he said.

After highlighting concerns with reports of Google’s practices at home and abroad, especially in China, McCarthy emphasized the significance of the hearing’s subject matter. “The free world depends on a free internet,” he said. “We need to know that Google is on the side of the free world, and that it will provide its services free of anti-competitive behavior, political bias, and censorship.”

Pichai sought to alleviate growing congressional concerns by asserting Google’s commitment to ideological neutrality and free expression on its platforms, as well as respect for the mountains of data it collects on consumers. However, even as Pichai seemed to adeptly navigate tough questions from Republicans and Democrats, concerns clearly remain and perhaps have intensified.

After the hearing Chairman Bob Goodlatte (R-Va.) indicated on FOX News that there was more to learn from Pichai and that Google and other tech titans may well face more questions in the next session of Congress. Significantly, just as NRB once again voiced on Monday, Goodlatte declared that he prefers tech companies police themselves, but that it may be soon be time for a review of Section 230 of the Communications Decency Act.

“It’s clear that companies like Google are doing more to edit the content that appears on their platform, making them more hands-on,” said Goodlatte. “If it were just, ‘here’s our platform — put whatever you want on it,’ then that would definitely be totally free speech. But if it’s not free speech, why do they get a free pass on protection against libel, for example?”

Even though Rep. Jerrold Nadler (R-N.Y.), who will claim the committee gavel next year, continued to dismiss substantiated viewpoint discrimination concerns as “a completely illegitimate issue, which is the fantasy, dreamed up by some conservatives,” tech companies must have noted that he, too, compared Google to media companies not protected by Section 230.

“And even if Google were deliberately discriminating against conservative viewpoints—just as FOX News and Sinclair Broadcasting discriminate against progressive ones—that would be its right, as a private company, to do so,” Nadler said.

Dr. Jerry A. Johnson, president & CEO of NRB, warned this week that time is running out for Google and other tech companies to act as evidence grows of discrimination against Christian and conservative viewpoints. In follow-up letters to leaders of several major tech companies he had addressed at the launch of NRB’s Internet Freedom Watch initiative last December, Johnson reminded them that if they neglect to act by the end of this year, NRB will call for new hearings and a review of Section 230.

Section 230 not only protects internet companies from liability for what users post on their platforms, it also includes a section facilitating their “Good Samaritan” blocking of offensive content by defending them from lawsuits based on content their moderation efforts may have missed. Echoing a statement he first raised in September during remarks at a tech conference in San Francisco, Johnson suggested it may be time to remove or suspend this “extra layer of government-granted content moderation protection for ubiquitous platforms suspected of acting in bad faith.”

Johnson urged that the companies avoid the conversation moving that direction by action on their own to defend freedom. However, he warned, “if major tech corporations continue to effectively ignore substantiated cries of viewpoint suppression – intentional or not, algorithmic or human – then I believe it’s time for a remedy.”