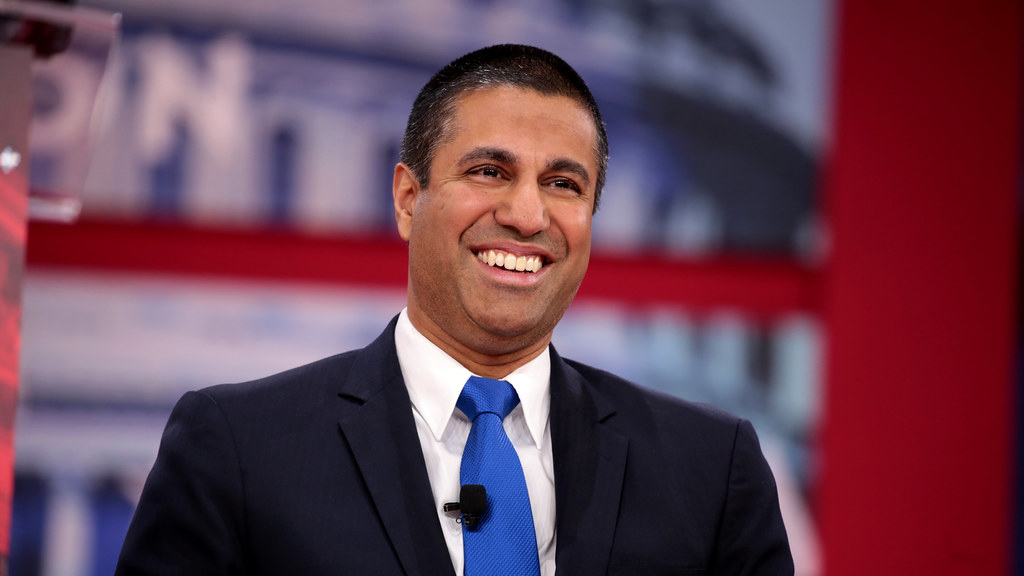 On Friday, former FCC Chairman Ajit Pai joined NRB CEO Troy Miller for an exclusive call with the NRB Board of Directors and President’s Council.

During these monthly calls, NRB leaders and guests discuss current issues that broadcasters and Christian communicators are facing.

Pai, a long-time friend of NRB, joined the Federal Communications Commission in 2007, began serving as an FCC Commissioner in 2012, and served as the chairman of the FCC from 2017 until earlier this year. He opened this online event by sharing about how his faith has impacted his work over the years, bringing up the recent Gallup poll showing that in 2020 only 47% of U.S. adults belonged to a church, synagogue, or mosque.

“I think it makes our role as Christian communicators even more important—to be able to explain the gospel,” Miller said.

Nearly 50 years ago, Pai’s parents came to the United States from India with $8. Pai said that “only in America” would he have the opportunity—only one generation later—to serve as FCC Chairman. Pai doesn’t take this opportunity for granted.

“I told my team that we really need to make the most of this time and try to deliver value for the people who are helping educate, inform, and entertain the populace,” Pai said. “Broadcasters were the vanguard of that, so we wanted to give all of you the chance to succeed in this increasingly competitive digital age. That involved getting rid of some of these legacy regulations.”

During his time as FCC Chairman, Pai accomplished many of his goals, but one of his favorite accomplishments while with the FCC was establishing rules that allowed noncommercial broadcasters to raise funds for nonprofit third parties for a limited amount of the station’s broadcast time.

“To allow you to devote a portion of your airtime for those important causes was a no-brainer to me,” Pai said. “I know there are some powerful opponents to it, but when I got into office, that’s one of the first things that I approved because you had people in need who weren’t being matched with people who could help, and that just didn’t make sense to me.”

Miller and Pai also discussed net neutrality—what it is, what it means for Christian communicators, and what happened with net neutrality during Pai’s time in office.

“We made the basic decision to restore the market-based framework for regulating the internet,” Pai said. “This is what the FCC had from 1996 until 2015. It incentivized companies to help build internet infrastructure, and to me at least, there wasn’t any problem with the internet networks themselves that need to be solved in 2015. We simply restored that framework in 2017.”

Pai received a lot of push-back and criticism regarding this decision and heard all kinds of predictions about what this would mean for the future of internet.

“Fast forward several years later, and the internet, from a network perspective, is free and open. We’ve seen a lot more infrastructure investment. Speeds are up over 100% since we made that decision,” Pai said. “And finally, there’s been a bipartisan recognition that the real threat on the internet in terms of openness is these social media platforms themselves, these big tech companies that decide who can speak and who can’t.”

All of this was in motion before the COVID-19 pandemic struck the United States.

“In 2018 and 2019, we set records in the United States for fiber deployment, with millions more American’s having access to the internet,” Pai said. “Even those fierce critics of our decision in 2017 would have to admit that America’s broadband economy held up pretty darn well considering the disruption we had back in March of last year.”

Despite all this, Pai has faced significant opposition. He told NRB leaders that his family and faith have been his core that has enabled him to withstand the pressure.

During the call, Pai and Miller discussed Section 230 and ongoing debates about changing the legislation. Pai noted that in general there is bipartisan agreement that Section 230 should be changed, but there is not yet agreement on how it should be changed. As the conversation surrounding Section 230 continues to play out, NRB is committed to advocating for its members for the advancement of the gospel.

“As Christian communicators, it’s important for us to stay into that cultural engagement and to work hard to keep the avenues open for the gospel,” Miller said. “That’s what we’re really working for here, at the end of the day.”

To conclude the call, Pai discussed what he saw as some of the next major hurdles in digital transition and how the FCC was working in some of these areas such as authorizing ATSC 3.0, the next gen TV standard which will allow broadcaster to compete mirroring the best of broadcasting and experimentation with all-digital AM radio.

Pai answered questions from attendees regarding the future of the FCC, international communication, threats to religious freedom, and cancel culture.

“We need to stand up. We need to be in the fight. We need to not be afraid. After all, we serve Christ who is still seated on the throne,” Miller said. “God’s providence is still there, and he is still in control and hasn’t called us to shy away from our duty to proclaim the gospel.”

As Christian communicators seek to understand regulation changes and to navigate these days with wisdom, NRB will advocate for its members and help them stay in the loop about new platforms and how to pursue diversification across platforms.

“We really loved and appreciated your leadership while you were at the FCC,” Miller told Pai. “All that you did there, especially your time as chairman, really helped to advance things for broadcasters and make their lives better and easier and champion things for us particularly in religious broadcasting. We’re really glad to hear that you’re still going to be involved in the fight.”