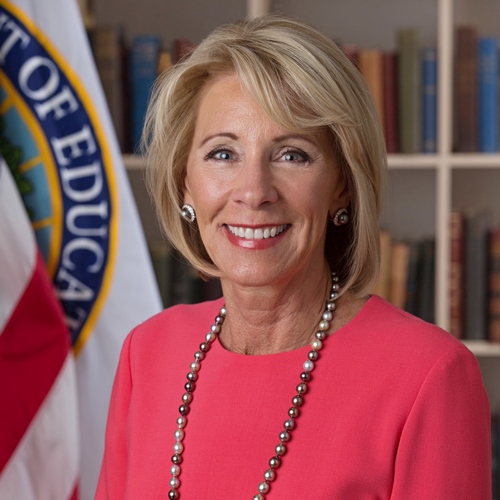 Citing the direction of the U.S. Supreme Court’s landmark Trinity Lutheran decision, U.S. Secretary of Education Betsy DeVos announced this week her department’s decision to drop a restriction currently blocking religious groups from being treated equally as contractors by the state.

“The Trinity Lutheran decision reaffirmed the long-understood intent of the First Amendment to not restrict the free exercise of religion,” said Secretary DeVos. “Those seeking to provide high-quality educational services to students and teachers should not be discriminated against simply based on the religious character of their organization.”

In 2017, the Supreme Court delivered a decisive 7-2 ruling in favor of religious freedom in Trinity Lutheran Church of Columbia v. Comer.  The case featured a church-run preschool that was discriminated against in a public playground re-surfacing program by the state of Missouri solely because it was a religious entity. Even though the preschool ranked as a highly qualified candidate for a grant under the program’s rules, the state cited a provision in its constitution – known as a Blaine Amendment – that prohibited it from supplying aid to a religion.

Writing for the court, Chief Justice John Roberts said, “[T]he exclusion of Trinity Lutheran from a public benefit for which it is otherwise qualified, solely because it is a church, is odious to our Constitution.”

Secretary DeVos has received predictable criticism from liberal groups like American United for Separation of Church and State and the Baptist Joint Committee for Religious Liberty, and Democrats on the House Education Committee are reportedly reviewing the legality of this new move by the Trump administration. However, DeVos explained her reasoning thoroughly in a letter to Speaker of the House Nancy Pelosi (D-Calif.): “Although the ESEA provisions in question may have been intended to advance the separation of church and state, the Trinity Lutheran Court expressly stated that such concerns do not provide sufficient justification for status-based discrimination against religious organizations.”

“Permitting religious organizations and secular organizations alike to provide secular services to schools does not violate the Establishment Clause,” she declared.

Kelly Shackelford, president and CEO of First Liberty, welcomed the decision: “Once again the Trump administration has made it clear that religiously affiliated businesses and organizations cannot be excluded from equal participation in government programs simply because they are religious.”

“The Department of Education’s guidance applies U.S. Supreme Court precedent and explains that government hostility toward religion is unconstitutional,” he added.

Of note, Shackelford will be participating in the Public Policy Session at Proclaim 19, the NRB International Christian Media Convention taking place March 26-29 in Anaheim, California.