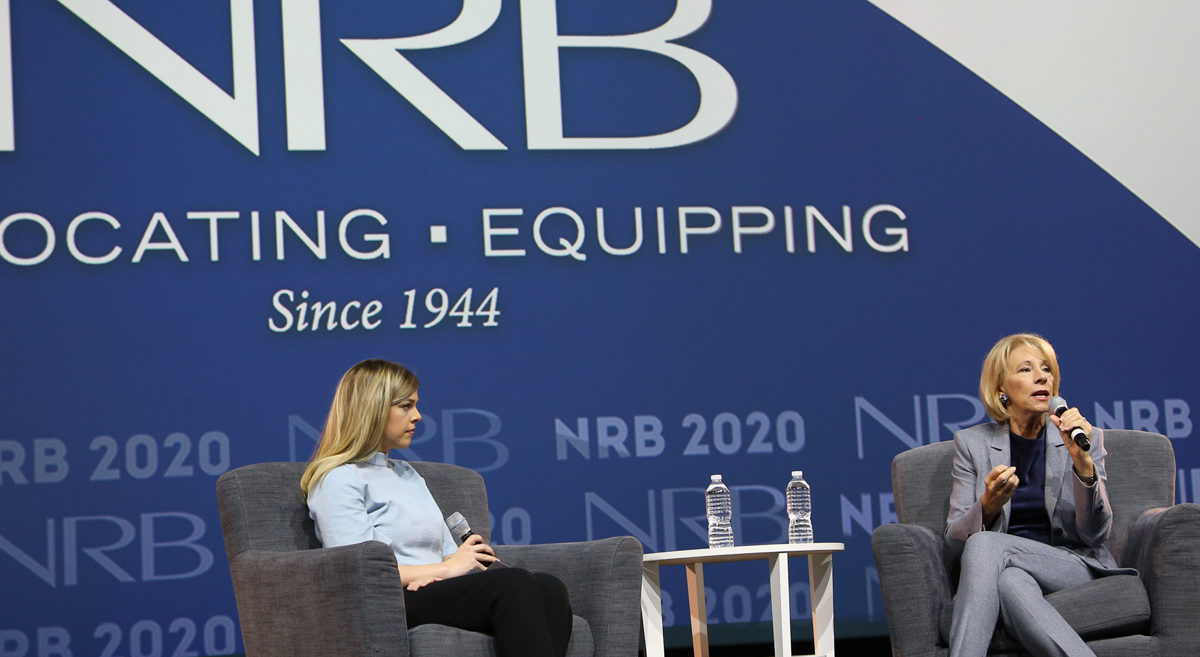 DeVos, who has worked for education reform for 30 years, said her faith is “foundational to everything” she does, informing “all of my days, all of my decisions.” She believes “every person is a uniquely created individual with bright potential,” she said, and she respects every person, even those with whom she disagrees.

“Sometimes it’s harder than others to have that perspective, but thankfully I have a Helper who is never far away to remind me of that,” DeVos said during the first half of the Morning Policy Session with interviewer Allie Stuckey, Host of the Relatable podcast.

Too many school districts and even states “have not allowed for that free expression of students, whether it be to pray before lunch or to have a club with some of their fellow students after school,” DeVos said.

The Education Department is asking school districts to make clear to families the process for reporting encroachments upon First Amendment rights, she said, “and then for states to report that issue to us so we’re aware of where these infringements are going on.”

“Everywhere we have the opportunity to either restate or clarify what should be the case under the First Amendment to our Constitution, we are doing so,” DeVos said.

The Department of Education under DeVos also is seeking to return decision-making for K-12 to states and local communities, which are better positioned to assess needs and implement the best strategies, she said.

“Depending on the year and how you measure it, five to seven percent of all funding for education comes from the federal level, yet all of the regulatory burden … is because of the federal government,” DeVos said.

As an example of the nuances needed in education, DeVos said she visited a remote village in the Arctic Circle last year and found the needs there vastly different from those in Miami, “yet the federal government in too many ways has imposed its will and its cookie cutter approach on students across this country.”

DeVos also discussed education freedom, noting the Trump administration has been working to ensure families “have the opportunity to have their children educated in the way that they want them educated.”

“We know every child is special and unique. They learn differently. There are different things that interest them, that excite them,” she said, “and yet too many kids today are forced to be in places, in schools that simply aren’t the right fit.”

In order to close the achievement gap that has not improved despite more than a trillion dollars being spent at the federal level alone, DeVos said her department wants to “empower families – those closest to the children” – to choose the venue that works best for their children.

Regarding the student loan debt crisis, DeVos said the Education Department has been working to provide students with more tools so they will be better equipped to make wise decisions about higher education.

She cited the myStudentAid app, which gives students the ability to compare by field of study or program the cost of attending various schools, “and importantly also what [their] first-year earning potential is after [they] graduate from that program.”

“This is the first time that this kind of information has been available at your fingertips for students and, frankly, parents to be able to help in that conversation,” DeVos said.

Another feature of the app is for students to “simulate what their loan story is likely to be and what the implications are for them,” she said.

DeVos emphasized a need to cap the amount graduate students can borrow and to promote multiple paths of education, including technical degrees that require less time and money than four-year degrees and are in high demand.

Following DeVos, Sekulow took the stage in place of his father, ACLJ Chief Counsel Jay Sekulow, who canceled his speaking appearance because his voice was “totally out” due to illness. Both men most recently defended President Trump during his impeachment trial and are preparing to litigate three additional cases on the President’s behalf before the U.S. Supreme Court.

A development that drew applause from NRB was Sekulow’s assessment that liberals can no longer count on the U.S. Court of Appeals for the Ninth Circuit to hand down the decisions they want.

Trump has named 10 judges to the Ninth Circuit, which the Los Angeles Timesnoted is more than one-third of its active judges and compares with seven judges appointed by President Obama during his two terms.

In a 7-4 decision on February 24, the Ninth Circuit “sided with the Trump administration on the defunding of Planned Parenthood under Title X,” Sekulow said.

Sekulow also pointed to cases that show federal laws “that have been on the books” but were not enforced in previous administrations are now “getting teeth.” In Vermont, for instance, a nurse who had gone through the proper channels to abstain from assisting in abortions was tricked into participating in one, he said.

The Department of Health and Human Services, Sekulow continued, told the University of Vermont they would lose federal funding if they didn’t correct the problem. The nurse had been protected by a conscience clause, Sekulow said, and HHS in this case stepped in to enforce it.

In Illinois, an FBI agent was not allowed to display Bible verses in his cubicle, but the policy was changed when the ACLJ stepped in, he said. In case after case, Sekulow said ACLJ is showing that religious speech cannot be treated differently than other speech.