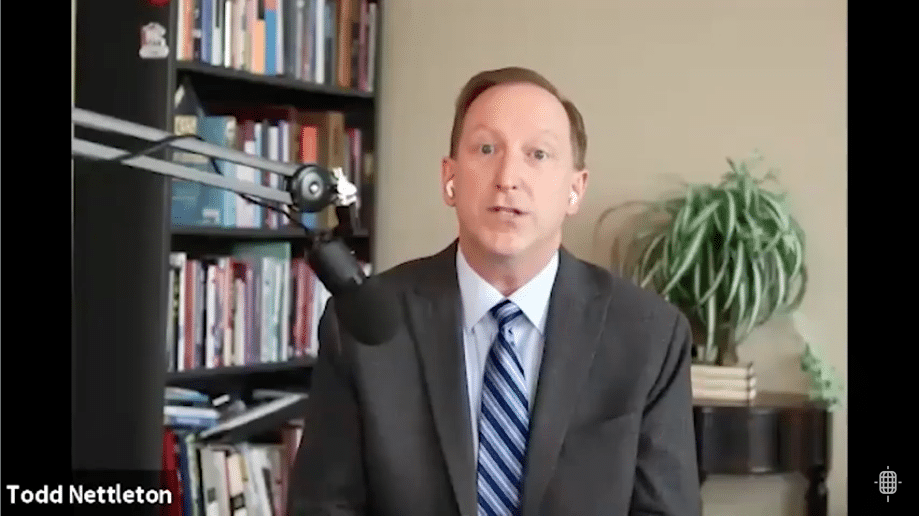 Christian Persecution and How Christian Communicators Can Serve

On Friday, August 20, Todd Nettleton, radio host of Voice of the Martyrs Radio joined Dan Darling, Senior Vice President of Communications at NRB, for NRB Live at Lunch to discuss Christian persecution in Afghanistan and around the world.

Nettleton serves as a voice for persecuted Christians, inspiring Christians with the faithfulness of Christ’s followers in 70+ nations where they face persecution for wearing his name. During more than 20 years serving at VOM, Nettleton has traveled the world and conducted face-to-face interviews with hundreds of Christians who’ve endured persecution in more than 30 nations.

He described the situation in Afghanistan as heartbreaking.

While there is a lot of uncertainty over what exactly will transpire over the next days and weeks, it is clear that Christians will be targeted. But stories of faith are being written in Afghanistan as Christians prepare for what they know is coming.

Nettleton said that VOM has heard from Christians there who know that the Taliban is coming and know that they are going to overtake their cities or towns. But they are confident that God has placed them there, and they are choosing to stay rather than to run or try to escape. They are trusting that God will be with them even when the Taliban is there.

“The number one thing we can do is to pray for our brothers and sisters in Afghanistan,” Nettleton said.

Despite the horrible circumstances that are unfolding in Afghanistan, Nettleton is hopeful that as young people see this face of Islam, they will not be okay with the violence and oppression but that they will seek other options and ultimately find Jesus Christ. There are radio ministries, television ministries, digital ministries, and ministries on-the-ground in Afghanistan that are ready to share the gospel when the soil is ready for the seeds.

There will be a time for delivering help, encouragement, and aid in Afghanistan, but for now as everything on the ground there remains so fluid, the Christian’s call is to pray. Nettleton specifically asked believers to pray for fellowship for the believers in Afghanistan. Many believers there are secret believers who are very isolated from other brothers and sisters.

“We pray that every Afghan believer can experience fellowship with another believer even under the Taliban,” Nettleton said.

While Christians in Afghanistan are at the front of many people’s minds right now, persecution around the world is ongoing. Nettleton encouraged Christians to think about their persecuted brothers and sisters not as broken or forlorn but as people experiencing the joy of the Lord—even experiencing prison as “a wonderful time.”

Nettleton told of a woman in China whom he interviewed shortly after she had spent six months in prison for hosting a house church in her home. When he asked her about her time in prison, she responded with what Nettleton described as a heavenly smile.

“Oh yes, that was a wonderful time,” she said.

And she meant it. Her definition of a wonderful time was contingent upon experiencing the presence of Christ and engaging in the ministry he placed before her.

Nettleton challenged believers to consider what in their lives could be a “wonderful time” if we had that attitude.

Persecution in Iran has increased in recent weeks following the recent presidential election there, yet Nettleton reminded attendees that this is the fastest growing church in the world. And satellite television is one of the key ways that the gospel is entering Iran right now.

In all of these places around the world where persecution is taking place, God is still at working—bringing people to himself and glorifying himself.

In China, it is clear that the government is watching people and looking for opportunities to persecute religious minorities. But Nettleton told of a church leader in China who encouraged his church to make sure that as the government was watching them, they were seeing the true gospel lived out.

But what can you as a Christian communicator be doing to love and serve your persecuted brothers and sisters in Christ?

Each year, the first Sunday of November is set aside as the National Day of Prayer for the Persecuted Church. Christian communicators can play a role in setting aside that day for prayer for persecuted brothers and sisters. Nettleton invited communicators to join in sharing the testimonies of persecuted brothers and sisters by airing VOM radio on their stations or by showing VOM video materials on their television broadcast stations. He also encouraged pastors share stories from his book “When Faith is Forbidden” in their sermons and discipleship.

“The first thing our brothers and sisters ask us to do is to pray for them,” Nettleton said.

And they’re not asking for prayers that they wouldn’t be persecuted anymore or that their governments would be overthrown and they’d have freedom.

“They’re asking for prayers that they would be faithful to Christ in spite of the persecution,” Nettleton said.

For more information about VOM and to make a donation and receive a free copy of Nettleton’s book “When Faith is Forbidden,” visit vom.org/forbidden.

Click here to watch a full replay of the event.