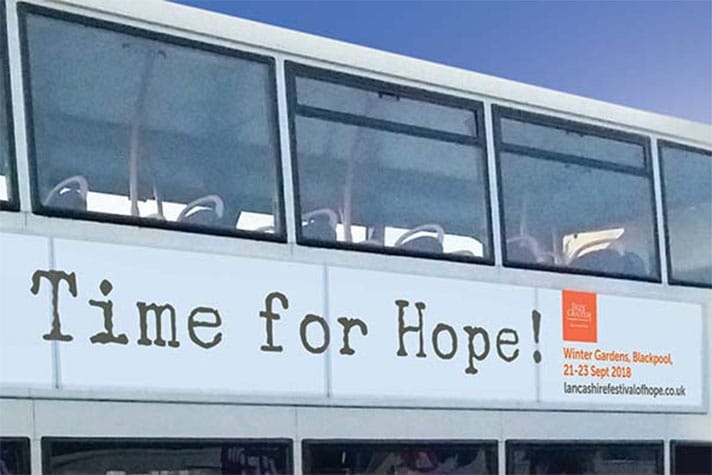 On April 2, 2021, a United Kingdom judge ruled in favor of Franklin Graham, saying that the town of Blackpool, England had violated religious liberty protections when it removed bus ads promoting a 2018 Christian event hosted by the Billy Graham Evangelistic Association, a longtime NRB member. Last week, Blackpool accepted the findings of the judge and formally agreed to the settlement terms of the case.

The Blackpool ad did not contain any overtly religious content. However, Graham holds a traditional view on marriage, and Blackpool Transport Services believed the ad was offensive to the LGBT+ community.

In the recent settlement, Blackpool Council and Blackpool Transport Services walked back their original statement and publicly apologized to Franklin Graham and the Billy Graham Evangelistic Association. They admitted that they discriminated against Graham’s religious beliefs and freedom of expression under Article 10 and 14 of the European Council of Human Rights Act.

To settle financial damages, Blackpool will pay £84,000 to cover legal fees and £25,000 in “just satisfaction” damages. More importantly, because the case cannot be appealed, it will serve as precedent in future cases meaning a victory for free speech and religious liberty in the U.K.

Franklin Graham said he was encouraged by the settlement and emphasized the necessity of free speech to spread the gospel all over the globe, including the U.K.

“This is an important moment for religious freedom in the UK. We’re grateful to God for the final outcome of this case, and for what it will mean for churches and Christians across the UK in the years ahead,” Graham said. “The Good News of Jesus Christ must be proclaimed. My prayer is that this case will encourage Christians to stand firm.”

NRB is committed to protecting free speech, and our team will continue to work to ensure that our members can share the Gospel without restrictions or censorship. We are thankful for this victory.