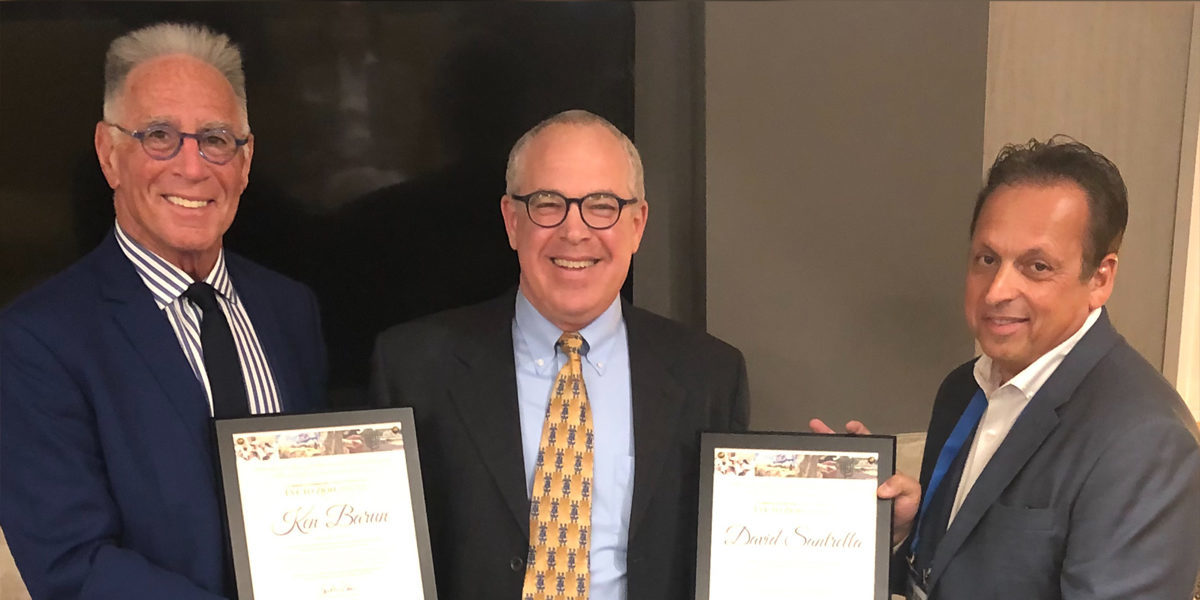 Ken Barun, Executive Vice President of the Billy Graham Evangelistic Association (BGEA), and David Santrella, President of Broadcast Media for Salem Media Group, were presented with the Genesis 123 Foundation’s “Eye to Zion” Award on February 25 during an event that took place concurrently with the NRB 2020 Christian Media Convention in Nashville, Tennessee.

The Genesis 123 Foundation is a U.S.-based nonprofit whose mission is to build bridges between Jews and Christians and Christians with Israel in ways that are new, unique, and meaningful. And the “Eye to Zion Award” recognizes Christian leaders and role models who understand that the fulfillment of the Jewish people’s 2,000-year-old dream to return to Israel is inseparably connected to, and fulfilment of, God’s promise to restore His people to the Land of Israel, which He deeded through Abraham, Isaac, and Jacob.

“Through their examples, their actions and support of Israel are not just noteworthy and should be celebrated, but highlighted for others to emulate,” noted Jonathan Feldstein, President of the Genesis 123 Foundation, in a press release.

In receiving the award, Barun discussed his personal background and family connection to Israel as part of what defines him. He thanked Franklin Graham, President & CEO of BGEA, for his leadership and noted that he is “proud to work for a person and ministry that embodies generations of Christian love for and support of Israel.”

As Executive Vice President of BGEA, Barun helps lead the ministry’s worldwide efforts and serves as Franklin Graham’s Chief of Staff. BGEA has a history of supporting Israel through its founder Billy Graham, and current President & CEO.

According to Genesis 123, Barun’s personal connection to and array of activities in support of Israel help to make mainstream something that is not yet able to be taken for granted among Christians.

“Being born a Jew in 1948 and raised with a family that embraced the biblical homeland of Israel I was instilled with an unswerving loyalty to the Land and the people of the Jewish state,” said Barun. “And as God led me through a series of complex and sometimes unbelievable life experiences, He has placed me in a position where I’m grateful to do what I can to bring understanding to the challenges facing the Jews and Christians who want to live and worship together in peace.”

As President of Broadcast Media for Salem Media Group, David Santrella leads one of the most influential media companies in the U.S. According to Genesis 123, Salem not only communicates support for Israel but makes “an intelligent, cogent why that is grounded in conservative values embraced by Jews and Christians, and which are good and important for America.”

In receiving the award, Santrella expressed gratitude and recognition of the efforts of the whole team at Salem Broadcast Media. Speaking of the importance of Israel as central to their work, he likened it to the birth of a child, saying, “The first time you witness the birth of a child you fall in love instantly and can’t imagine your life without that person. My feeling toward Israel is the same, from my first visit, and is central in all our work from tours to Israel and among all Salem radio hosts.”

In recognizing noteworthy Christian leaders, the “Eye to Zion” Award serves as a virtual Christian Zionist Hall of Fame – one rooted not in physical achievements, but in a solid spiritual foundation that honors God’s imperative to bless Israel, according to Genesis 123.