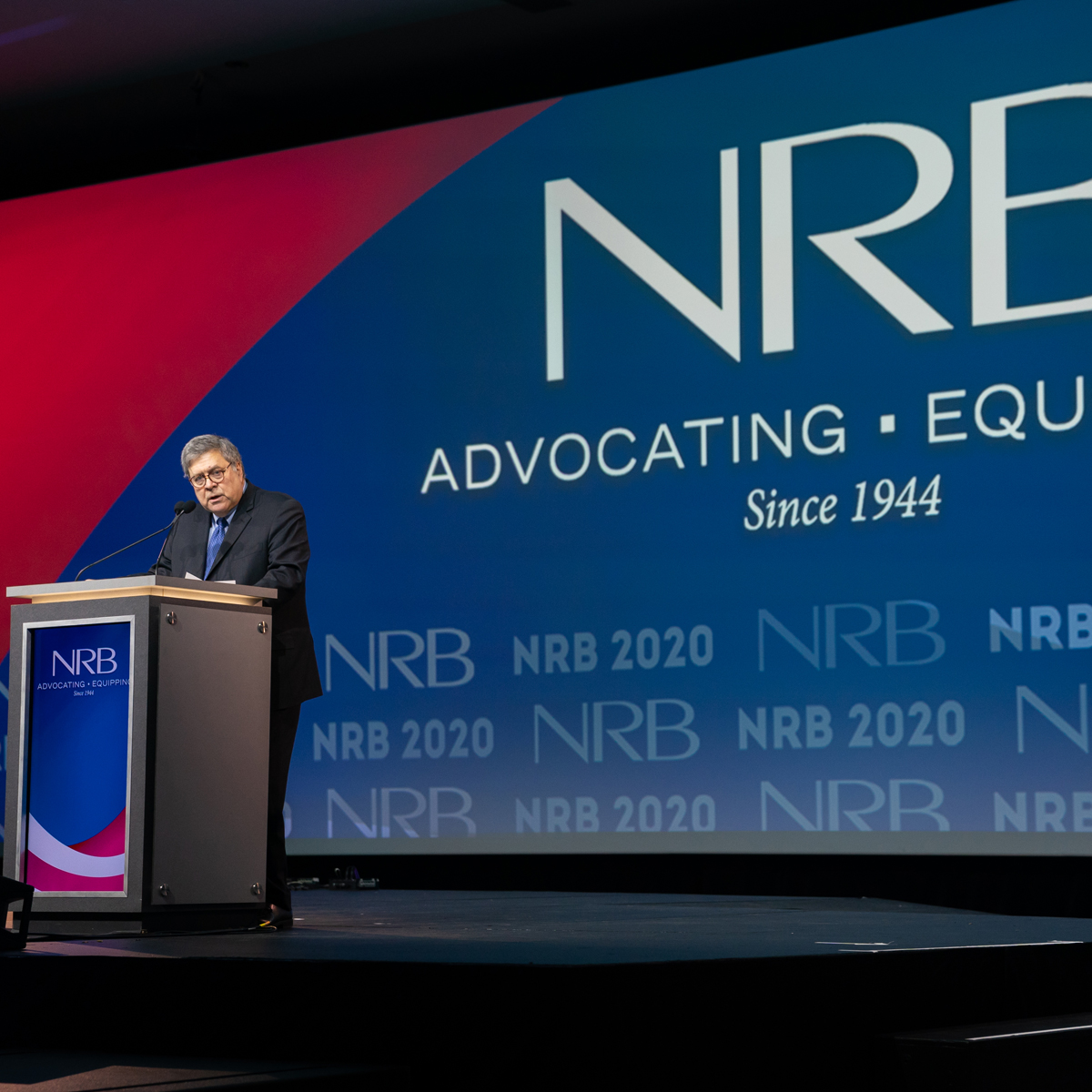 NASHVILLE, Tennessee (NRB) – U.S. Attorney General William Barr spoke at the NRB 2020 Christian Media Convention in Nashville, Tennessee, on February 26, and commended members of the Christian media for their role in countering the effort to drive religion – “long an essential pillar of our society” – from the public square.

Barr recognized how NRB’s members ”courageously affirm that entertainment and moral education are not mutually exclusive.”

The Attorney General went on to say the passionate political divisions pervasive in America today “result from a conflict between two fundamentally different visions of the individual and his relationship to the state.” One vision undergirds liberal democracy, he said, and the other propels totalitarian democracy.

Liberal democracy, which limits government and prioritizes personal liberty, has its roots in Augustinian Christianity, Barr said. St. Augustine knew that “while we work toward our eternal destiny, we live in the temporal world,” which is fallen, he said.

Augustinian Christianity “saw the state as a necessary evil with the limited function of keeping the peace here on earth,” Barr said. “These foundational ideas gradually evolved into our current conceptions of individual dignity, personal liberty, limited government and the separation of church and state.”

Because such a worldview recognizes man is imperfect, Barr said, “it does not try to use the coercive power of the state to recreate man or society wholesale.” Liberal democracy understands that government must only “preserve the proper balance of personal freedom and order necessary for a healthy civil society to develop,” he said.

Totalitarian democracy, however, “is based on the idea that man is naturally good but has been corrupted by existing societal customs, conventions, and institutions” including religion, Barr said. “Its goals are earthly, and they are urgent,” and it requires an “all-knowing elite to guide the masses toward their determined end.”

“Totalitarian democracy is almost always secular and materialistic, and its adherents tend to treat politics as a substitute for religion,” Barr said.

A significant reason for the polarized politics of today, he said, “is that some in the so-called ‘progressive’ movement have broken away from the fold of liberal democracy” to pursue a society more in line with totalitarianism beneath a veneer of democratic choice.

“The tacit goal of this project is to convert all of us into 25-year-olds living in the government’s basement, focusing our energies on obtaining a larger allowance rather than getting a job and moving out,” Barr told NRB.

He credited French historian Alexis de Tocqueville with foreseeing this demise of the American political system, including that it would be “slow and imperceptible.”

“Historically,” Barr said, “our country has relied on a number of bulwarks against this slide toward despotism” – primarily religion, the decentralization of government power, and the free press. “The sad fact is that all three have eroded in recent decades,” he said.

Barr quoted founding father John Adams, who wrote, “Our constitution was made only for a moral and religious people. It is wholly inadequate for the government of any other.”

To be strong enough to control willful human beings, Barr said moral values must be based on an authority independent of man’s will. “In other words, they must flow from a transcendent Supreme Being.”

Tocqueville knew that in America, “religion has instilled a deep sense that there are immovable moral limits on what a majority can impose on the minority,” Barr said. As a result, “it is safe to give the people power to rule, but only if they believe there are moral limits on their power.”

Concerning the decentralization of power, Barr said the Framers intended that individuals be subject to two sovereigns: the national government and their state government, believing that “matters ought to be handled by the smallest, lowest competent authority that was closest to the people.”

The federal government, he said, was mainly supposed to handle foreign relations and national defense as well as “integrating economic affairs across the states so we could have a single national economy.”

Instead, today the federal government “is now directly governing the country as one monolithic entity with over 300 million people,” Barr said.

“The Framers would have seen a one-size-fits-all government for hundreds of millions of diverse citizens as being utterly unworkable and a straight road to tyranny,” he said.

The third pillar which has broken down in modern society, Barr said, has resulted in a mainstream media that is massively consolidated and “monolithic in viewpoint” while “an increasing number of journalists see themselves less as objective reporters of the facts and more as agents of change.”

The key to restoring the press in its vital role, he said, is to “cultivate a greater diversity of voices in the media.”

“That is where you come in,” Barr told NRB. “You are one of the last holdouts in the consolidation of organs and viewpoints of the press. It is, therefore, essential that you continue your work and continue to supply the people with diverse, divergent perspectives on the news of the day.  And in this secular age, it is especially vital that your religious perspective is voiced.”

The United States’ greatest days lie ahead, Barr said, “but only if we can alter our course and pay heed to the lessons of the past.”

“It’s not too late to stem the tide, but we need to get to work,” Barr said.