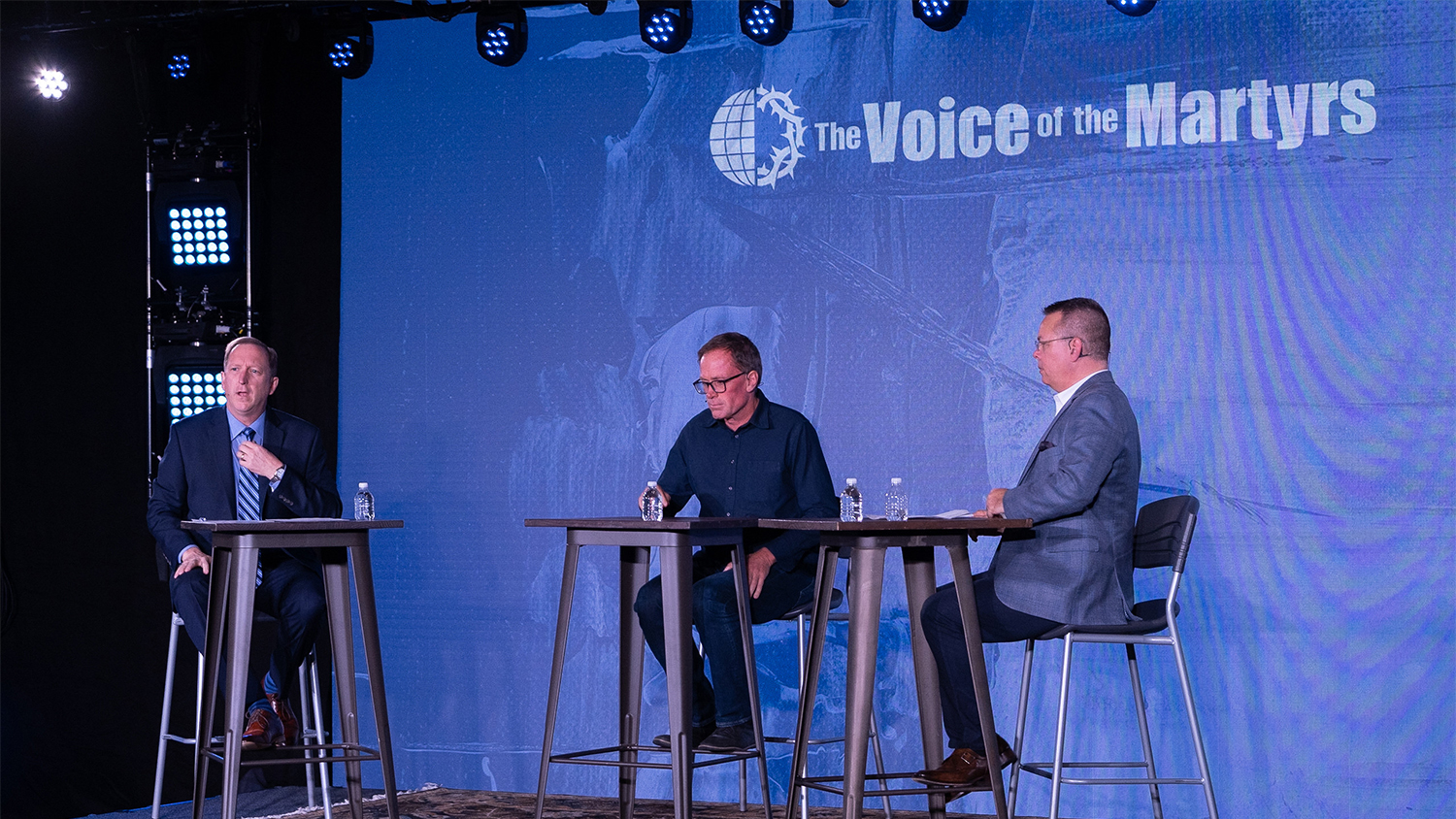 Christians in more than 1,200 churches and thousands in their homes from over 150 countries gathered online March 5 to hear stories from three Christian workers arrested and imprisoned for their faith during the Imprisoned for Christ virtual event hosted by The Voice of the Martyrs (VOM).

This special event featured former prisoners sharing their testimonies of how God brought them through fear, emotional and spiritual darkness, self-harm and suicide attempts, and even crises of faith. While all three struggled to find God’s purpose in their suffering, they ultimately recognized God’s faithfulness and love amid desperate circumstances.

As a long-time staff member at VOM, Petr Jasek has seen first-hand persecution and discrimination against Christians all over the world. But in 2015, while in Sudan to help persecuted Christians, he was arrested, charged as a spy, and sentenced to life.

In prison Petr faced grave danger, was threatened with waterboarding, and forced to share a cell with ISIS terrorists, including a top lieutenant of Osama bin Laden, who was one of those responsible for the gruesome beheading of 21 Coptic Christians in Libya in 2015.

During the Imprisoned for Christ virtual event, Jasek shared lessons he learned in his 14 months in prison, saying the Lord saved his sanity and strengthened him through Bible verses he memorized as a boy in the Czech Republic.

“My first concern was not that I will actually die in prison,” said Jasek. “I was feeling like I am losing my sound mind, and I was praying hard asking the Lord, ‘Please keep my mind sound.’ The Holy Spirit kept reminding me of important passages from Scripture that continued to give me peace.”

Pastor Andrew Brunson, a 25-year church planter in Turkey who spent two years in prison there from 2016-2018, said the isolation of solitary confinement was where he “really began to break” and that not “feeling the presence of God” put him into a crisis of faith.

“I feared I would lose my sanity, and I felt that at times I actually tasted insanity, that I went over the edge and pulled myself back,” said Brunson. “I feared I would get to some point where I could no longer pull myself back. It is at this time that I became suicidal.”

Brunson also feared he would begin to drift away from God.

“At no point did I want to reject God, but I was afraid in that environment with no support, with no encouragement and with all the doubts I was having, that I would begin to drift away,” he said.

He found comfort and counsel in biographies and books from former prisoners, including another speaker at the event, Dan Baumann, and VOM’s late cofounder, Pastor Richard Wurmbrand, who spent a total of 14 years imprisoned in communist Romania.

“I read that there are many people who go under that valley of testing, and that the valley of testing is full of the skeletons, the dry bones of believers who failed. It is not that they lose their salvation. They end up losing their friendship with God and having lives with no fruit,” said Brunson.

This really hit Brunson hard, he said. “It just drove into my heart. I had reached that point where my relationship with God was being strangled by all the doubts and the questions that I had.”

Baumann, who was falsely imprisoned for nine weeks in Iran in 1997, said prison was the hardest time of his life that led him into a darkness that drove him to attempt suicide four times.

“If God loves Dan then why is Dan in prison? If God is for Dan, if God is strong, why would He let him sit here? With that came depression and heaviness,” said Baumann.

With two death sentences, one for being a missionary and one for being a spy, Baumann began to realize he might be in jail for a long time, which deepened his depression.

Around the 10th month of Brunson’s imprisonment, he hit a turning point when he became determined, realizing there was very little he could do to secure his freedom but that he “could fight in my relationship with God. So I began to exercise the will.”

Every day Brunson began reminding himself of the truths of God and would dance around his cell for five minutes, puzzling his cellmates about his sanity. “I would leap as Wurmbrand leapt. I would say, ‘I rejoice that I am suffering for You.’”

A turning point came for Jasek when he saw how the sovereignty of God gave him purpose in his suffering and imprisonment. Jasek had been moved to a different prison, where he shared a crowded cell with many other prisoners. After 12 Eritrean refugees responded to Petr sharing the Gospel message, Jasek prayed, “Lord, now I know why I had to stay in prison: because these people needed to hear the Gospel.”

“I went to Sudan for just literally four days,” said Jasek. “But the Lord turned these four days into 445 days. In one sense it might seem like a disaster for someone, but just think about the Lord’s wisdom and how He allowed me to preach in places where no one else could probably preach the Gospel.”

Likewise, Baumann shared how an encounter with the truth of God’s love helped him forgive and befriend his captors who beat him. This turnaround gave him the courage to boldly share God’s love in front of his accusers and an Iranian judge. “I am standing there in my prison clothes on the witness stand and in walks a judge. The judge looks at me and says this, ‘Sir, you have two death sentences on your life; why did you come to Iran?’

“I was so scared. As I was shaking something happened,” said Baumann. “A Scripture comes into my mind, ‘Do not be afraid when you are called before the authorities for at that time I will give you the words to say.’ I looked at the man, and I said, ‘Sir, I came here to tell you about Jesus Christ.’ As I said that something rose up within me. The fears that I struggled with, the fears that I had, started to fall away, and the truth of what I really believed started to come out.

“In the middle of my sermon I realized something else. I was free! Because you can’t kill a dead man. I had given my life so many times to Jesus,” said Baumman. “So what if they kill me? My home is heaven, and I am going home to heaven. They can kill this body, but they cannot touch what God has done in my heart. I kept preaching.”

Throughout the Imprisoned for Christ virtual event, the speakers emphasized how prayer lightened their burden, loneliness and suffering and asked all believers to pray for those in chains for their faith in Christ.

Jasek testified that he was able to fall asleep every night at the exact time believers in his own church had committed to daily praying for him.

“Pray for the brothers and sisters, especially for those who are in prison, that the Lord would give them courage to share the Gospel in places where he wants them to be.” said Jasek.

Brunson said he was “desperate to know that the Body of Christ was standing with me, and that I had not been forgotten. This is what took me through week after week: knowing people are still praying. They are still praying.

“That is one of the things with The Voice of the Martyrs, as you gather prayer and focus it in on people who don’t have others praying for them, it really makes a difference,” said Brunson. “Just knowing that we have brothers and sisters who are standing with us is so important in continuing to be faithful.”

“For more than 50 years, VOM has been ministering to persecuted Christians in hostile and restricted nations, and calling on Christians in free nations to pray for them and actively choose fellowship with them,” said Todd Nettleton, VOM’s Chief of Media Relations and Message Integration and host of The Voice of the Martyrs Radio. “During the Imprisoned For Christ virtual event, the speakers really showed how important those prayers are—how they literally make a life-and-death difference for our Christian brothers and sisters. It’s exciting to know that, in one evening, tens of thousands of Christians have been inspired to commit to pray for persecuted Christians. And we hope many more will be inspired as they watch on-demand in the months to come.”

Because of the popularity of this event, it is being offered on-demand for free through this year’s International Day of Prayer for Persecuted Christians on Sunday November 7, 2021. Churches and small groups can also host for free and receive an eight-week study on the life of VOM founders Richard and Sabina Wurmbrand, who were imprisoned in communist Romania. Free registration is available at www.vom.org/virtualevent.

Photograph courtesy of Voice of the Martyrs. 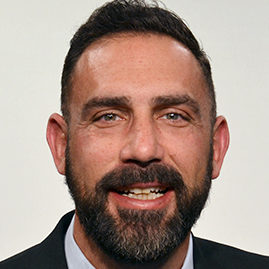