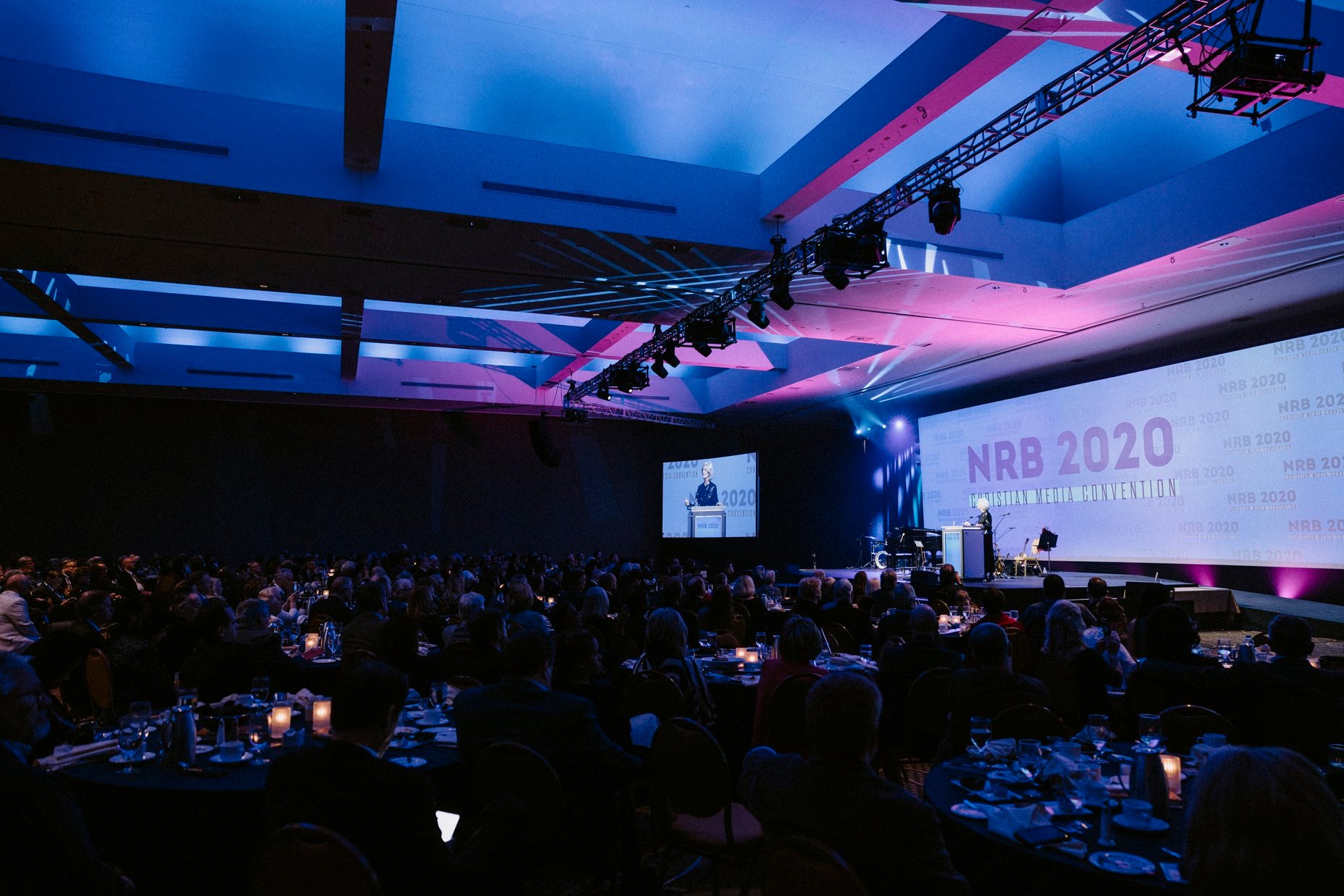 We have a great line up of speakers, sessions, and events at NRB 2021, June 21-24. As you plan your time with us, here are twelve events (in chronological order) you won’t want to miss:

The Media Awards Lunch, sponsored by Hope for the Heart and ProLove Ministries, will take place on Monday from 11 a.m. to 12:45 p.m. in Texas Ballroom AB. We hope you’ll join us for this special lunch event as we recognize the recipients of this year’s Church Media, Digital Media, International, Radio, and TV Industry Awards! Learn more about this year’s awards winners here.

Tickets are required for this event, but it’s not too late to modify your registration to attend this event today.

2. Opening Session with Mark Jobe, Paula Faris, and The Erwins

Join us as we officially kick off the NRB 2021 Convention with Mark Jobe, Paula Faris, and The Erwins! The opening session, sponsored by Mercy Ships and Israel Ministry of Tourism, will take place on Monday from 7 to 9 p.m. in Texas Ballroom AB.

During this session, Jobe, President of Moody Bible Institute, will discuss the changing media landscape. Paula Faris, former host of Good Morning America and the View, will talk about her calling as a broadcaster, and sibling musical guests The Erwins will lead us in praise and worship.

3. The Making of Reagan

Special guest, Dennis Quaid, will give attendees a sneak peak of the making of the biographical movie, “Reagan.” The much-anticipated movie is set to release in 2022. Join us on Monday from 9 to 10:30 p.m. as Quaid discusses what it was like to play the role of President Ronald Reagan.

On Tuesday at 9 a.m. in Texas Ballroom AB, Dr. Jerry Davis and Jack Phillips will be joining Kristen Waggoner for a panel discussion sponsored by Alliance Defending Freedom to talk about the human cost to denying religious freedom. What price are conscientious Christian citizens likely to pay, under the current administration, for honoring their conscience and holding fast to their sincerely held religious convictions?

Two men who are paying that price will share their experiences—Dr. Davis, who is leading College of the Ozarks in opposing a government policy requiring men to be housed in women’s dorm rooms, and Phillips, a Colorado cake artist who continues to be singled out by state officials for declining to use his talents to communicate messages that violate his religious beliefs. Join us as we learn about how these two men are finding the courage to stand against an increasingly hostile culture.

Join on Tuesday from 11 a.m. to 12:30 p.m. in Grapevine Ballroom AC as media producer Phil Cooke, and NRB Senior VP of Communications Daniel Darling discuss how to grow your church or ministry, reach more people with your message, and engage your community effectively. We’re excited to bring together church media staff and ministry professionals for this special event. We hope you’ll join us to learn, fellowship, and be encouraged in your work.

Tickets are required, and space is limited. Modify your convention registration to get your church media lunch ticket today.

6. How to Build a Podcast Audience

Podcasting is an emerging medium that is witnessing explosive growth. Once you’ve launched your podcast, how do you grow an audience and find listeners? On Tuesday at 11:15 a.m., podcast hosts Rob Kirkpatrick, Craig Denison, Jason Ramano, and Tara-Leigh Cobble join panel moderator Casey Helmick to share insights from the industry and tell about their experiences in order to help you take your podcast to the next level.

7. Session with Dallas Jenkins and Derral Eves on the Story and Formula of “The Chosen”

“The Chosen” publicly launched in November of 2017 on a Facebook page of a couple hundred friends and family. Its first post was a short film shot on a farm in Illinois for a church. Now in Season Two, “The Chosen” has shattered records, been viewed over 100 million times, and is in every country on its own app—one of the top 25 Entertainment apps in the world. On Wednesday from 2 to 3 p.m. in Longhorn DEF – Theater, the founding partners of “The Chosen,” Dallas Jenkins and Derral Eves, will take you through every step of their journey with the show—most of which were made up as they went along—so maybe your steps can be less painful than theirs.

On Wednesday morning from 7 to 8:30, International Christian Embassy Jerusalem (ICEJ), Combat Anti-Semitism Movement (CAM), and NRBTV are sponsoring a breakfast to honor the nation of Israel. This one-of-a-kind exciting celebration is always a sold-out event, so be sure to sign up before you get to NRB 2021. You can modify your convention registration to get this ticket. This year’s event is sure to be a highlight of your time at NRB.

In this live edition of their popular Unashamed podcast, Phil, Jase, and Al Robertson will take you beyond the four walls of the church to experience God’s Word, take on the culture, and laugh along with funny and inspiring stories of faith and family. This live recording will take place on Wednesday from 4 to 5:30 p.m. in Texas Ballroom AB, and they will be joined by guest Zach Dasher, CEO of Tread Lively Entertainment.

The event is sold out. If you are registered for the event, be sure to have your ticket ready when you arrive for the premiere.

The Crown Awards recognize excellence in the production and content of films and videos that are created to reflect Christian values. The awards show, sponsored by Called Higher Studios and The Chosen will take place in Texas Ballroom AB from 8 to 10 p.m. on Wednesday night.

12. A Conversation with Joel Rosenberg and former Secretary of State, Mike Pompeo

A lot has happened in the Middle East over the last several years, and nobody has been at the center of these developments more than former Secretary of State Mike Pompeo. In this special session sponsored by Tithe.ly, bestselling author, Joel Rosenberg will interview the former Secretary of State and CIA director about Israel, the Abraham Accords, and the state of the Middle East. They will also discuss important developments in international religious freedom.

Join us on Thursday at 9 a.m. in Texas Ballroom AB for this event and for the presentation of the NRB President’s Award.

If you haven’t registered for NRB 2021, there’s still time to join us! Click here to register and be a part of this incredible event.