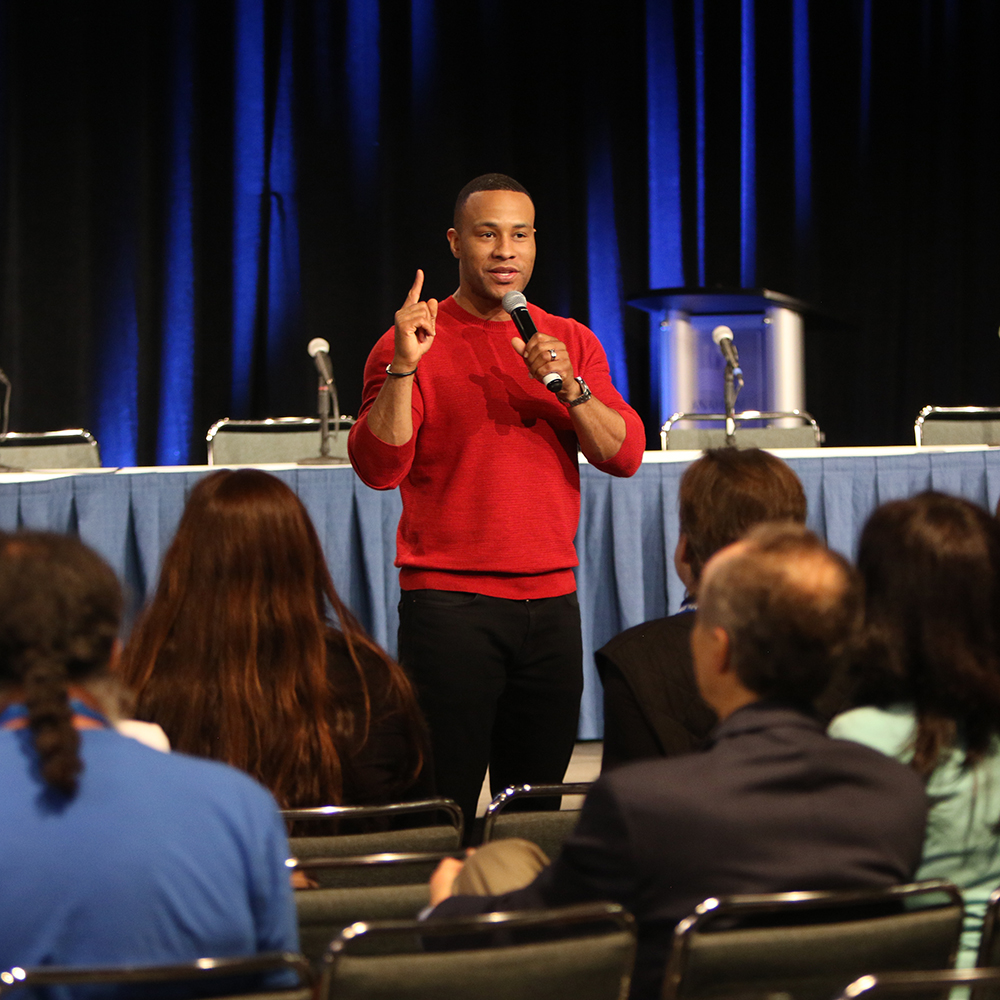 ANAHEIM, Calif. (NRB) – Two Christians in the film industry underscored the importance of personal character as they do their work in Hollywood as followers of Jesus during TV & Film Summit presentations March 27 at Proclaim 19, the NRB International Christian Media Convention in Anaheim, California.

Developing stories that people connect to is essential in filmmaking, said DeVon Franklin, president and CEO of Franklin Entertainment.

Franklin is producer of the 20th Century Fox film Breakthrough, set to release April 12, 2019. Breakthrough chronicles a 14-year-old boy who drowns in a lake and his mother who prays for him to survive and be healed. The film was screened at Proclaim 19.

Franklin shared about how he discovered the story of Breakthrough, the process for developing the screenplay and script, and what filming looked like for his team and crew. Breakthrough is the only film Franklin has ever produced — including The Pursuit of Happyness, The Karate Kid, and Jumping the Broom — that the production company accepted without a pitch.

“God’s had His hand on Breakthrough since the beginning,” he said.

Franklin hired Grant Nieporte as the writer, Roxann Dawson as the director, and Chrissy Metz, among others, as an actress for the film.

Franklin credits both the success of the filmmaking and the brief turnaround to God’s direction and provision through his team.

“Part of this is God’s plan and faith and people working together to get it done,” he said.

During a Q&A, Franklin was asked how faith affected his work in Hollywood. He noted that while Breakthrough is about prayer, his personal practice on the set is important.

“It’s really the crew who takes their cue from the producer and the director and how they set the tone,” he said. “It was really important to model prayer even beyond our work and what we said. Whenever I’m producing a film, how I work is more important than what I say because that is what communicates to people if I am who I say I am and I believe what I say I believe.”

Kendrick, co-director of Kendrick Brothers Productions and a writer, director, actor, and author from Albany, Georgia, led a session about his journey through filmmaking, including Fireproof, which became the number one independent film of 2008; Courageous (2011), which generated $34.5 million at the box office; and War Room (2015), which generated more than $70 million.

Kendrick shared about his career as a producer and as a Christian and the lessons he learned throughout each season of creating films. 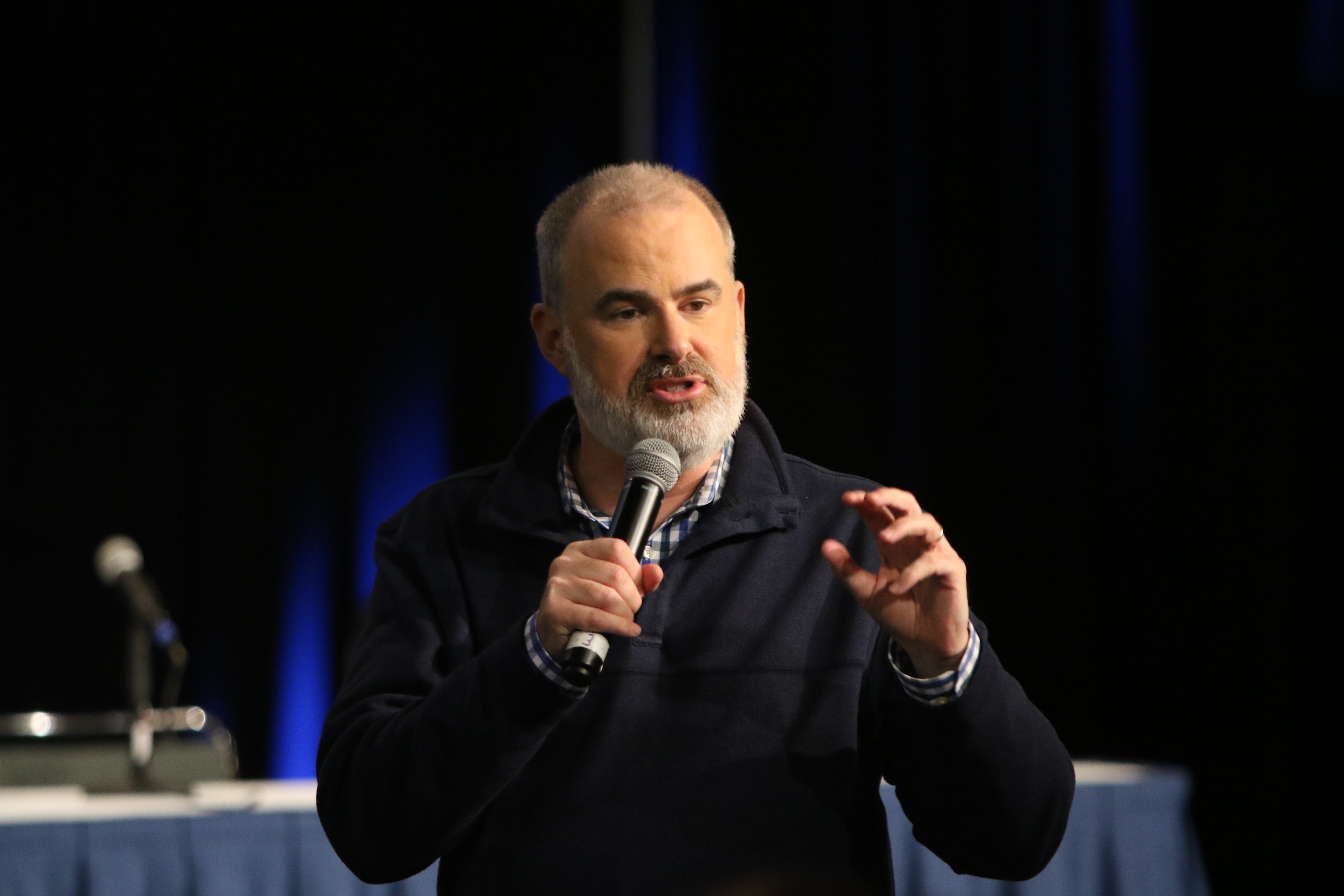 As he began receiving both criticism and praise for his first larger film in 2006, Facing the Giants, he said he doubted whether or not he was a true filmmaker, asking if he should consider himself “a legitimate storyteller.” He began to realize the struggle in filmmaking between seeking glory for oneself and glory toward God.

“The more I get into filmmaking the more I realize it is an art, but it should not be idolized,” he said. “Whenever I do something for the Lord, the Lord is very interested in where my heart is – am I truly reflecting Him, or am I doing something seeking glory for myself?”

The only way to have the Lord’s favor, he said, is through humility, which is a difficult lesson to learn.

“Praying for humility is a hard prayer to pray,” he said. “He humbles us so He can bear more fruit through us. We need to be broken and humbled in order to bear the most fruit.”

As Kendrick continues to create films, including the forthcoming Overcomer, set to release August 23 and was screened at Proclaim 19, he believes there is often credibility to criticism film makers receive.

“Take the validity of the criticism and learn from it,” he told attendees. Take the praise, on the other hand, and remember anything good that happens through people as creators and image bearers is from the Lord.

As people in the film industry, Kendrick reminded the audience that what they do for a career is “public presentation – whether it’s straight Gospel, radio or television, motion pictures, or print,” he said. “What you and I do is public presentation and ideally all of us would say I want God to use me to draw people to the Kingdom.”

Kendrick and Franklin's "Faith in Front of the Camera" and "Faith on the Big Screen" sessions were among several that were organized for the one-day NRB TV & Film Summit. Other panel topics included  "The Future of Television," “The Future of Film,” “Where are the movies on Christian TV?” and “Women in Entertainment,” which featured a star-studded eight-woman panel including Shari Rigby, Madeline Carroll, Priscilla Shirer, and more.