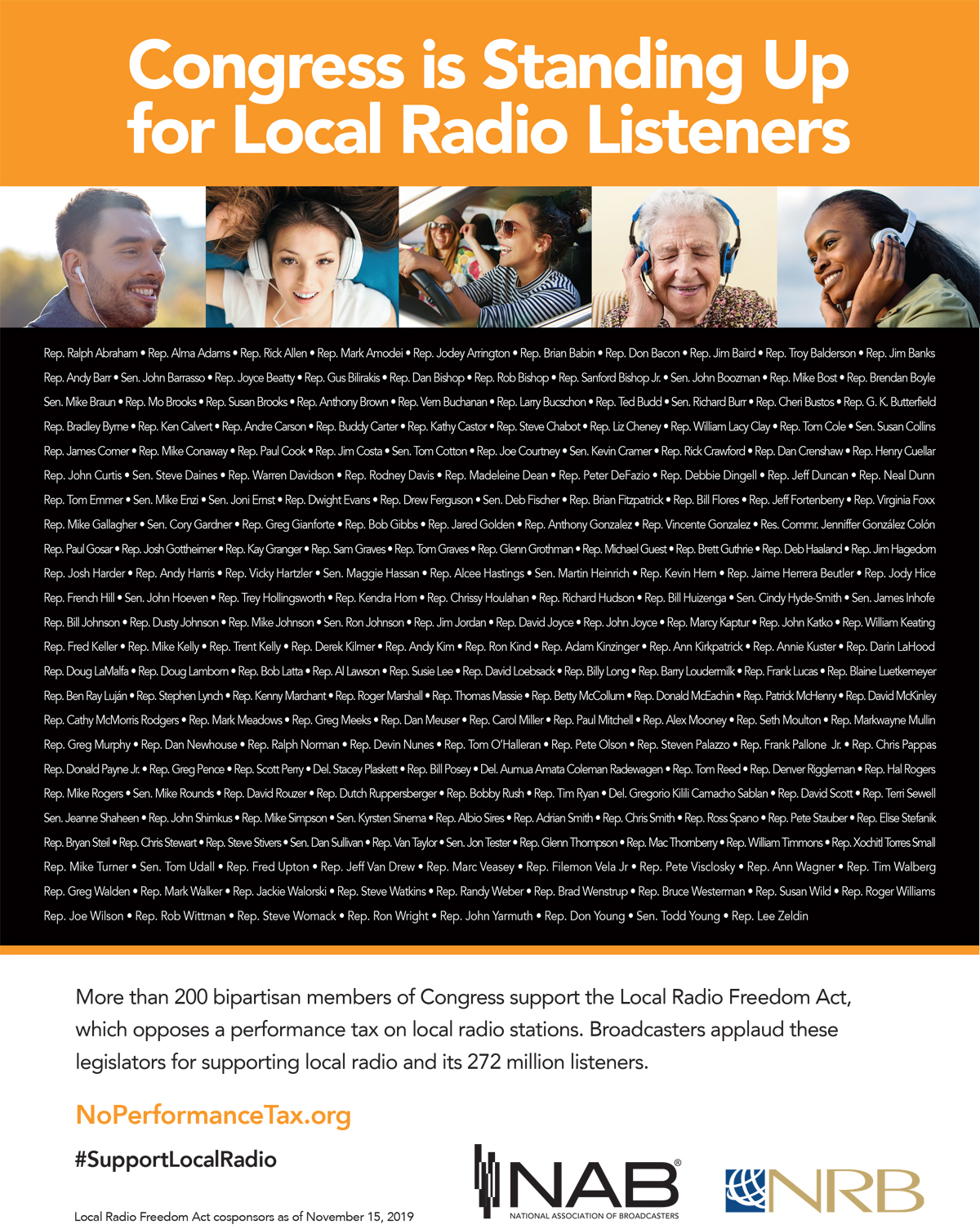 You may have noticed that for some time our United States Congress – and particularly the House of Representatives – has been locked in a rugby-like scrum of partisan struggles. So, it is very refreshing to see that on one issue at least there is a growing bipartisan effort in the House, supported by NRB and our ally NAB: the effort to save local radio from a devastating new “performance” tax that would be imposed on stations that play music, driving many of them out of business.

NRB has long opposed efforts to create an entirely new copyright royalty entitlement for every music performer and singer that would then be collected through excessive fees on radio stations. One major objection to this proposal is the fact that music performers already benefit enormously from radio airplay of their music, which has clearly contributed to the sales of their music in the consumer marketplace. But there are other problems with the “performance tax” idea as well, including the fact that it would create a veritable death-knell for many stations that play your favorite songs.

The solution to this is the Local Radio Freedom Act, which now has bipartisan support from more than 200 members of the House, and a growing number in the U.S. Senate. NRB’s advocacy mission is to protect the rights of Christian media communicators to full access over all radio, television, and internet venues so Biblical content can be shared. But “access” presupposes the ability to survive. Hearing your favorite Christian music over the radio assumes the ability of Christian stations to stay on the air. And that, of course, requires that crushing economic penalties – like a music “performance tax” – not be levied against those stations.

This is just one aspect of NRB’s advocacy efforts, and our need for vigilance in the face of mounting threats. Other issues directly implicating freedom of religion and freedom of speech abound. For instance, one presidential candidate has proposed that religious nonprofit charitable organizations lose their tax-exempt status for opposing same-sex marriage, while others in the same televised debate refrained from disagreeing.

Meanwhile, the Equality Act has passed in the House, and, if signed into law, will openly strip well-established religious liberty rights away from employers. Giant Silicon Valley internet monopolies that control digital communications have consistently censored Christian viewpoints – a trend being countered by NRB’s John Milton Project for Digital Free Speech.

Whether it is the right of Christian radio stations to prevail economically against the threat of punitive music tariffs, the protection of constitutionally upheld tax exemption for religious groups, the religious freedoms of faith-based employers, or the free speech rights of Christians to voice their viewpoints over the internet, NRB’s advocacy arm is standing firm in those arenas, and more.